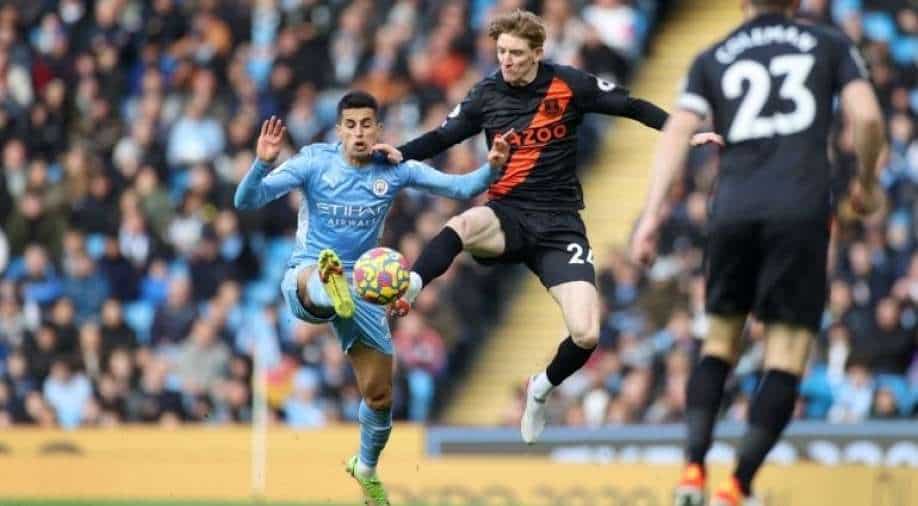 Raheem Sterling, Rodri and Bernardo Silva got the goals as Manchester City cruised to a 3-0 win over Everton to move within three points of Premier League leaders Chelsea.

With the focus of the football world on events across Manchester on Sunday as United sacked manager Ole Gunnar Solskjaer, City made light work of seeing off an Everton side still decimated by injuries to key players.

Pep Guardiola was also without Kevin De Bruyne after the Belgian tested positive for coronavirus and the injured Jack Grealish, but still had far too much in reserve for the Toffees.

It’s been all Man City so far, but Everton looked to have successfully frustrated the hosts until Raheem Sterling's opener. Will Rafa Benitez change his side's approach after the break?#MCIEVE pic.twitter.com/01abnWZ22C

Sterling was denied a penalty midway through the first half by a VAR review after referee Stuart Attwell initially pointed to the spot for a trip by Michael Keane.

The England international did not have to wait long to net on his 300th Premier League appearance as he turned home Joao Cancelo's sensational pass with the outside of his right foot for his 98th goal in the English top flight.

Without the presence of Dominic Calvert-Lewin up front, Everton rarely threatened.

Rafael Benitez's men have now taken just two points from the last 18 on offer in the Premier League to drop into the bottom half of the table and just six points clear of the relegation zone.

Rodri's stunning long-range drive into the top corner 10 minutes after the break ended the game as a contest.

City were then content to cruise for the final half-hour with one eye on Wednesday's Champions League clash with Paris Saint-Germain.

Sterling should have slotted home his second of the afternoon from Riyad Mahrez's inviting cross, but was instead denied by international teammate Jordan Pickford as he tried to round the goalkeeper.

City did get a deserved third five minutes from time when Silva followed up after Cole Palmer's shot was blocked.