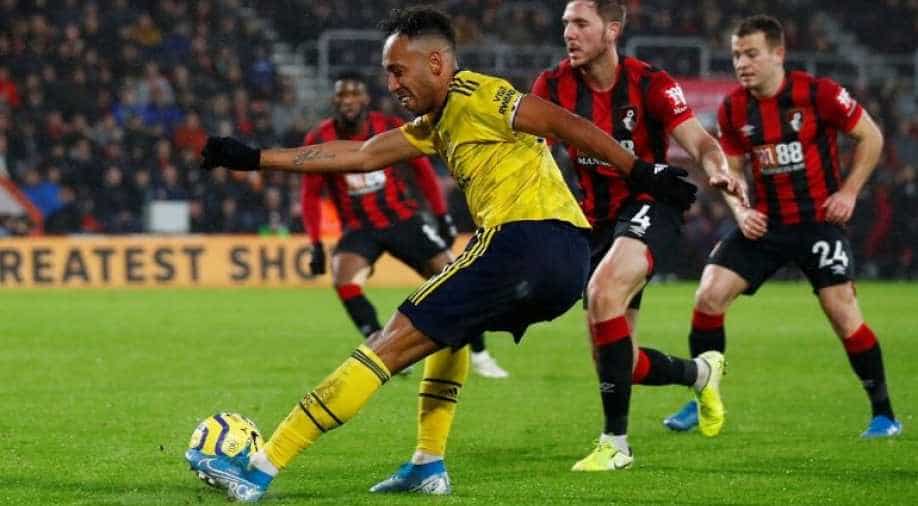 Mikel Arteta disappointed as Arsenal fail to buzz past Bournemouth with a draw, leaving the gunners with only one win in the last five games.

A second-half equaliser from Pierre-Emerick Aubameyang gave Mikel Arteta a point in his first game as Arsenal manager as his side came back from a goal down to draw 1-1 with Bournemouth in the Premier League on Thursday.

The two sides came into the game in poor form, with Bournemouth having lost six of their last seven and Arsenal only winning once since beating Bournemouth 1-0 at the Emirates on October 6.

Arteta restored Mesut Ozil to the starting line-up and the German forward looked sharp in the opening exchanges, but despite Arteta energetically encouraging his team from the sidelines, they failed to create many chances.

Arsenal's sloppiness was punished when they gave the ball away cheaply on the left-wing and Bournemouth sliced through them quickly, midfielder Dan Gosling stabbing home Jack Stacey's centre from close range to give the home side the lead.

The Gunners equalised in the 63rd minute as Reiss Nelson's shot deflected into the path of Aubameyang, and he swivelled to rifle the ball home before a wild celebration with the travelling fans that earned him a yellow card.

Both sides created opportunities in the pouring rain, but neither could grab a winner and the draw left Arsenal in 11th place on 24 points, with Bournemouth four points further back in 16th.

"We missed a lot of chances in the second half, we should get the three points today but that can happen," Aubameyang said. "I think the attitude of the boys was great but we have to improve our chances."

💬 "The attitude was great but we have to improve in taking our chances.

"The mentality was good, so that's nice for the future."

Arteta was disappointed not to win the game but said his players had performed well.

"In terms of attitude, desire and commitment it was better than I expect. They are not used to playing at this rhythm," said the 37-year-old Spaniard, who spent five seasons as a player at the club.

"I am still learning about the players, about the priorities, to make them more secure when they jump on to the pitch. My only aim now is to find solutions, to attack better, defend better," Arteta added.