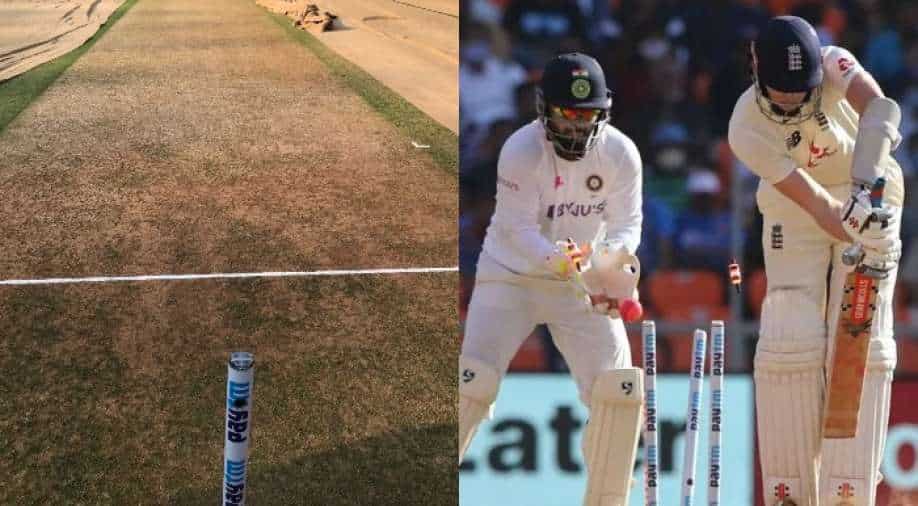 India vs England, Test series: England started the four-Test series against India with a thumping 227-run win in Chennai and the visitors including former English cricketers were ecstatic over the accomplishments achieved by the Joe Root-led outfit in Asian conditions. However, things changed drastically as India reverted to their preferred choice of pitches. Praises turned into criticism but interestingly, the critics have been more interested in the pitch while ignoring the poor batting on display – mainly by the England batsmen

England started the four-Test series against India with a thumping 227-run win in Chennai and the visitors including former English cricketers were ecstatic over the accomplishments achieved by the Joe Root-led outfit in Asian conditions. However, things changed drastically as India reverted to their preferred choice of pitches. Praises turned into criticism but interestingly, the critics have been more interested in the pitch while ignoring the poor batting on display – mainly by the England batsmen. In the second Test in Chennai, England suffered a thrashing of 317 runs.

While voices started to echo about the ‘rank turner and 'dustbowl’, they mostly remained suppressed due to the fact that two Indian batsmen (Rohit Sharma and Ravichandran Ashwin) scored a century each while three (Ajinkya Rahane, Rishabh Pant and Virat Kohli) ended up bagging half-centuries in the match. Compare that with England's performance, their highest scorers over the second Chennai Test were Moeen Ali (43) and Ben Foakes (42). England's struggle against spin was evident at the MA Chidambaram Stadium as it was exploited by the likes of Lasith Embuldeniya in Sri Lanka.

The focus shifted to the world's largest cricket stadium in Ahmedabad, which just before hosting its first-ever Test match after being refurbished completely was named after India's Prime Minister Narendra Modi.

As the grandeur of the 1.32 lakh capacity Narendra Modi Stadium set in on a hot afternoon in Ahmedabad for the pink-ball Test, England skipper Joe Root quickly opted to bat first after winning the coin flip.

What followed was sheer domination by Indian spinners – Axar Patel and Ravichandran Ashwin - as the duo scalped 18 out of the 20 England wickets to wrap up the game in just two days. While critics, mostly non-Indians were quick to point all their fingers towards the pitch of the Narendra Modi Stadium, it seemed like there was a sense of sheer ignorance over England's abysmal batting performance or over the fact that there have been only 16 Day/Night Tests so far in international cricket and the chances are likely, that due to lack of matches in pink-ball under the lights, players can end up struggling.

It was clear with the way both India and England lined up for the match. While England went with three pacers excluding Ben Stokes, India went with three spin options with Ashwin, Axar and Washington Sundar at the helm. One could say, England failed to read the conditions like many other teams have done over the past when playing matches in England, Australia, South Africa or any other country and went on to lose the game. But the critics chose to blame the pitch, urging ICC to dock points for India, even when there was no drastic turn on offer on the Ahmedabad strip.

The likes of Andrew Strauss, Alastair Cook, Michael Vaughan, Monty Panesar, David Llyod among other notable voices in cricket fraternity chose to lambast India's choice of pitches when it comes to playing Test matches but interestingly, none of them had an issue when the ball was seaming around for four days during the West Indies’ tour of England in the year 2020. But the outcry isn't surprising, remember the reactions when Ashwin decided to run-out (Mankad) England batsman Jos Buttler in IPL? One could understand what Ashwin meant with the series of tweets he put out recently.

Products are sold using various marketing strategies and that’s an accepted practice! We now live in an era where ideas are also being sold to us and it’s a classic example of “outbound marketing”, however I would like to add that buying ideas being sold to us is like telling us

Finally. We can always have and stand by our opinions even if it’s against the majority as long as we know that it is our own and not the one thats been sold to us!

“The choice is always ours”

More interestingly, no one had an issue when New Zealand prepared 'green mambas’ when they hosted the likes of India (in February 2020), West Indies (in December 2020) and recently Pakistan (in December-January 2020-21). The argument came, the live grass was "deceptive" in nature. While the visiting teams struggled, New Zealand were sublime in their home conditions and bagged results that ensured a spot in the final of the ICC World Test Championship. It seems like everyone loves a packed slip cordon when Tests are being played in England and Australia but get frustrated to see close-in fielders coming in early in India.

Critics came out from their caves on the top of their voices as soon as Indian spinners started to bamboozle England batsmen. What should have been a good debate, turned out to be an outcry. So much so, that veteran spinners like Ravichandran Ashwin and Nathan Lyon came out to express their views on the matter. Ashwin came out all guns blazing in a press conference, dated February 27, two days after the third Ahmedabad Test was wrapped up.

ALSO READ: 'Everyone in the world starts crying': Nathan Lyon gives his verdict on Ahmedabad pitch

"I have said that in the past as well, everyone is entitled to their opinion and I am not here to say that your opinion is right and it is wrong. The fact remains that the talk about the surface is getting out of hand. Why would you talk about the surface and sell that to us time and time again? Is there any instance where the pitch has been talked about this much when we have played games in other countries," Ashwin addressed the virtual press conference attended by both UK and Indian media.

"I somehow find it funny that when they speak about the surface, it immediately gets quoted all over in our press and this is the issue here. There have been instances, we have been to New Zealand, where both the Tests got over in a total of five days. There is a video doing the rounds where Virat Kohli is talking in South Africa and he says I am not here to talk about the pitch. That is how we have been taught to play cricket, that's why I say let them sell thoughts, buying is our choice.

"The bowler wins the game, the batsmen need to bat well to score runs. Who defines what a good surface is? Seam on the first day, then bat well in the next couple of days and spin on the last two days, come on, who makes these rules? We need to get over it and if you are asking whether the pitch in the third Test was a good surface, I do not see any players of England coming out and complaining. You should be hoping for a good cricket match, not the surface."

India planned well, utilised their resources to perfection, brought Axar Patel into the action with the ball, in the sixth over of the match, in a bid to trouble the England batsmen with that extra lacquer on the pink-ball. The plan should have been branded a "masterpiece" but then a terrific performance was diverted by the pundits towards the pitch, which they termed "lacklustre" and "poor advertisement" for Test cricket.

But they should, at the same time, look at the batting display by the England batsmen as well. Even Indian batsmen were poor with their footwork and shot selection in the third Test, which was pointed out by Virat Kohli during the post-match presentation. But the likes of Andrew Strauss thought the Indian skipper was defending the pitch as if it is a BCCI style.

“To be honest, I don't think the quality of batting was up to standards. We were 100 for 3 and then got bowled out for less than 150. It was just the oddball turning and it was a good wicket to bat in the first innings. It was bizarre that 21 of the 30 wickets fell to straight balls, Test cricket is about trusting your defence. Lack of application ensured it was a quick finish,” the Indian skipper had said.

Kohli was correct to some extent. Experienced English batsman Jonny Bairstow missed straight deliveries in both innings by Axar Patel to bag a pair.

Half of the Englishmen were anticipating spin as they threw their wickets away to Axar, who was simply relentless with his line and length after getting a hang of the wicket quickly on his local ground. He didn't spin the ball much or neither did the pitch assist him in getting big turns. 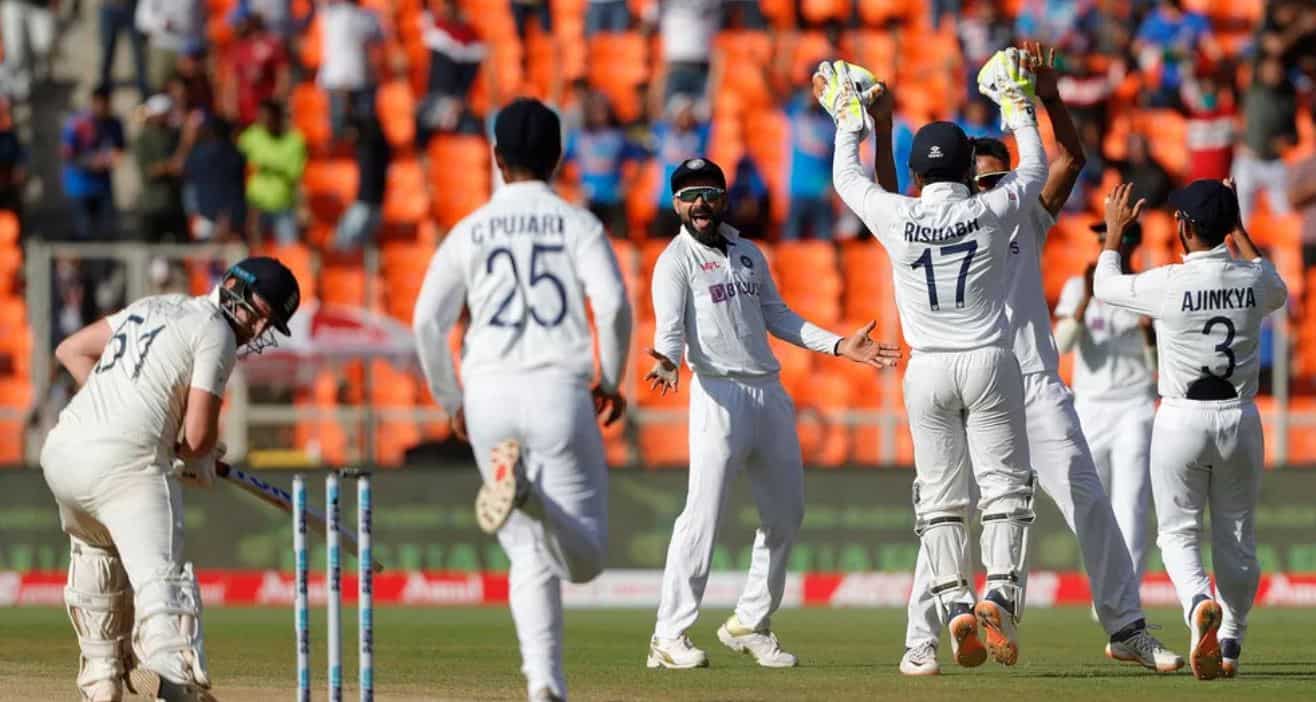 And for Bairstow's technique in the second innings, the gap between the pad and bat was wider than road twists at Monaco Grand Prix. Like Bairstow, every England batters’ technique was flawed as they pressed forward and anticipated spin despite the ball skidding on. Poor cricket? Yes.

It was just the case of extra lacquer of the pink-ball or 'glare' as Axar said in a post-day press conference, helping the ball skid and rush the batters. For the visitors, they kept on missing the line of the stumps. The much-talked-about umpires’ call did help the Indians get some of those wickets.

Even the Indian batsmen missed deliveries by Jack Leach which didn't spin much. The case of inexperience in the pink-ball Test comes into play here and not only for India but for England as well. But the critics chose to blame the curator, the BCCI for “not ready for Test cricket” pitch.

And for those urging ICC to rate the pitch at the Narendra Modi Stadium as ‘poor' or 'below average’, they must read the rating rules put in place by the ICC.

Was there an excessive spin on offer on Day 1 and Day 2 of the pitch? No. Only Joe Root, with his sidearm action, zipped through and got a few deliveries to spin. Ashwin, Axar and Leach occasionally bowled some deliveries that spun sharply. But it was inconsistent and something for which one can't rate the pitch as poor.

One could understand the frustration of broadcasters who shell out a heavy sum and expect full five days of Test cricket. But teams play to win and it is not the players’ fault if the opposition batsmen are missing straight deliveries and displaying a poor sense of cricketing technique.

Dom Sibley's dismissal in the second innings sums up how the Englishmen applied themselves. To try and play against the line of the ball with little or no technique – against a bowler who picked up six wickets in the first innings – is super ambitious. Is that acceptable? Maybe a few former English cricketers could analyse and answer that.

Test cricket is regarded as the toughest format of the game. When Asian teams visit countries like England, Australia, South Africa – it is built up as a test of their temperament and technique. The same is said when SENA teams visit Asian conditions but following some poor performances, the focus doesn't remain on cricket, it gets diverted towards the pitch and conditions.

Maybe it is time when some critics start following what a great man once said, "focus on cricket, not on pitches”.