'Pleased and grateful': Novak Djokovic tweets after his visa cancellation is revoked ahead of Australian Open 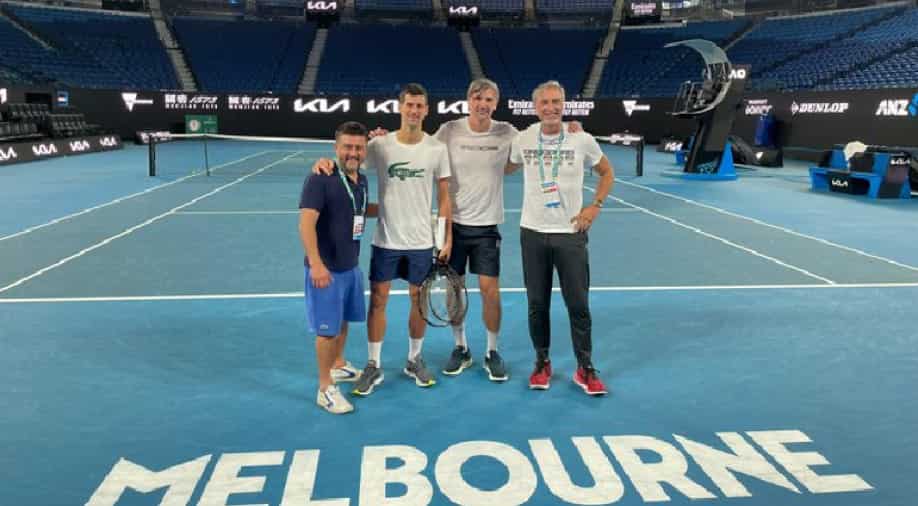 Novak Djokovic won the court case to get the decision of his visa cancellation revoked. Photograph:( Twitter )

Tennis superstar Novak Djokovic has broken his silence for the first time after winning visa case ahead of Australian Open 2022.

Tennis superstar Novak Djokovic said he was 'pleased and grateful' after winning a court case in Australia against the cancellation of his visa by the authorities in the country. Djokovic had headed Down Under to take part in the Australian Open 2022 after being granted a medical exemption as he had refused to reveal the status of his COVID-19 vaccination.

However, the authorities deemed his medical exemption invalid and sent him into detention in a quarantine facility in Melbourne. The tennis star spent five days in the hotel before winning a court case to have the decision of his visa cancellation revoked during a hearing at the Federal Circuit and Family Court of Australia.

Judge Anthony Kelly passed the decision in his favour, ordering his immediate release from detention. After being released, Djokovic took to Twitter to rejoice at his victory and assured his supporters that he intends to stay in Melbourne and continue his bid to defend his Australian Open title in the tournament which gets underway from January 17.

"I'm pleased and grateful that the Judge overturned my visa cancellation. Despite all that has happened, I want to stay and try to compete @AustralianOpen," Djokovic said in a tweet while sharing a picture of himself with his team.

"I remain focused on that. I flew here to play at one of the most important events we have in front of the amazing fans. For now I cannot say more but THANK YOU all for standing with me through all this and encouraging me to stay strong," he added.

I’m pleased and grateful that the Judge overturned my visa cancellation. Despite all that has happened,I want to stay and try to compete @AustralianOpen
I remain focused on that. I flew here to play at one of the most important events we have in front of the amazing fans. pic.twitter.com/iJVbMfQ037

Djokovic's win in the legal battle has left the Australian government red-faced as it came as a huge setback for them with not many expecting the tennis star to have an easy ride. However, as it turned out, Djokovic was released immediately from detention and is now back on the tennis court, much to the joy of his family and supporters.

Djokovic's brother thanked Australia's legal system and judge Kelly for helping truth and justice prevail in the matter. He said the family went through an emotional roller coaster ride as Djokovic spent five days in detention in Australia while fighting a legal battle to play in the Australian Open.

"We have done everything we can to comply with all the protocols. We are very emotional and it's very difficult for us to defend Novak without offending anyone.

"Truth and justice have come out and I hereby want to thank Australia's legal system and judge Kelly, who has been unbiased and neutral as he took on board all the facts since he landed at Melbourne airport, including the bullying he's been through."