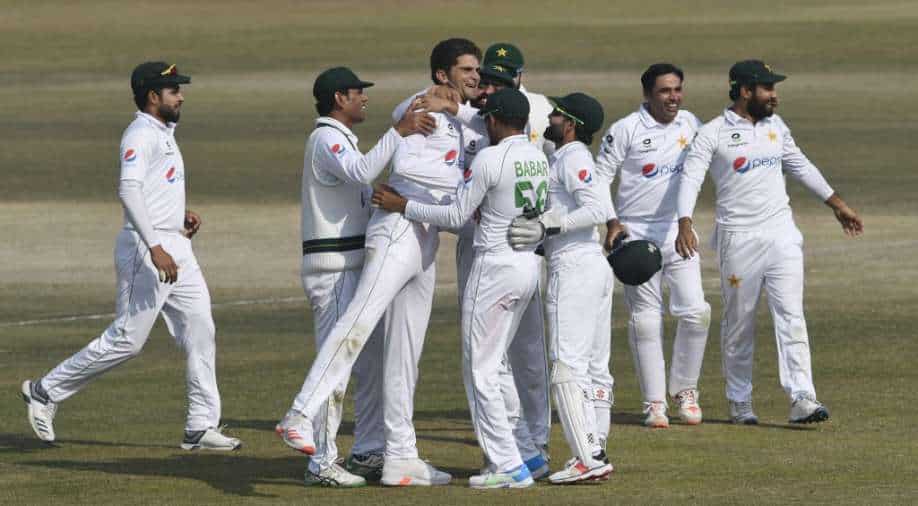 Pakistan on Monday won its first-ever series against South Africa since 2003 as the Babar Azam-led side defeated the Proteas by 95 runs in the second Test in Rawalpindi to clean-sweep the series 2-0.

Pakistan on Monday won its first-ever series against South Africa since 2003 as the Babar Azam-led side defeated the Proteas by 95 runs in the second Test in Rawalpindi to clean-sweep the series 2-0.

While the likes of Aiden Markram (108), Rassie van der Dussen (48), Temba Bavuma (61) showed great grit and resilience to take the chase closer, other batters failed to support the troika as visitors were bundled out for 274 with Pakistan pacer Hasan Ali picking up a five-fer and his best match figures of 10-114.

Markram and Bavuma put a 106-run stand for the fourth wicket but it was Hasan who dismissed the former with the second new ball.

The 2-0 win is Pakistan's only second over South Africa in 12 series, having lost eight and drawn three. Pakistan had won the first Test by seven wickets in Karachi.

The two-match series against South Africa – who toured Pakistan for the first time in 14 years – is the biggest hosted by Pakistan since the deadly 2009 terrorist attack on Sri Lankan side in Lahore.

Batting first, Pakistan posted 272 runs on the board, courtesy a fine 77-run knock by Babar Azam. While Anrich Nortje picked up a five-fer in the first innings, Keshav Maharaj ended up with three wickets. South Africa in reply, posted 201 runs with Bavuma top-scoring with an unbeaten 44.

With a handy lead, Pakistan went on to score 298 courtesy a cracking century by Mohammad Rizwan and a 45-run knock by Nauman Ali.

"I enjoyed the captaincy and got to learn a lot. When the team supports you and plays according to plan there isn't much pressure on the captain. Hasan Ali made an outstanding comeback, he is playing after 2 years and his bowling was really outstanding. Today morning Hasan Ali gave us those early wickets and got us back into the game. We keep trying senior-junior combinations in the slip cordon and we are working on our fielding aspect and really happy with our catching in the series. This gives us a lot of confidence and gives the group a lot of confidence. Markram and Bavuma played really well but we knew we could always manage that one breakthrough and make things happen with the new ball," said Pakistan skipper Babar Azam after the match.