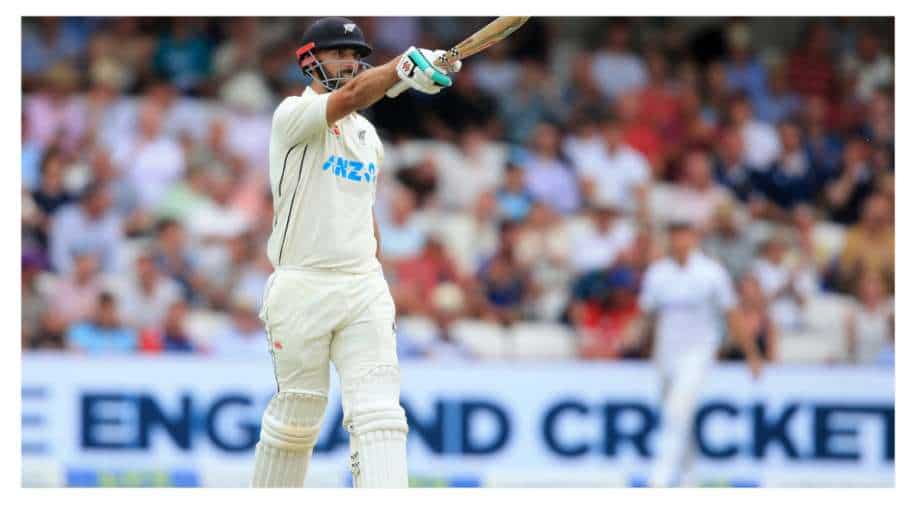 In-form Darly Mitchell continued his merry run in the England-New Zealand Tests and slammed his third consecutive ton to join big names in an elite list.

New Zealand had their chances but failed to capitalise in the opening two Tests, of the three-match series, versus hosts England. In the third and inconsequential tie, being held at Headingley, Leeds, Daryl Mitchell -- who was been in red-hot form for the visitors -- continued his merry run to slam his third consecutive ton in the series.

Mitchell had slammed a ton in the second innings of the opening Test, at Lord's, and scored a century in the first innings of the second Test before repeating his heroics in NZ's first essay in the final Test. after Kane Williamson & Co. opted to bat first. With Kiwis reeling at 123-5, the onus once again fell on Mitchell-Tom Blundell as the duo stitched yet another century-stand -- third on the trot -- to bail NZ out of a crisis. While keeper-batter Blundell fell for a well-made 55, Mitchell registered his fourth ton overall, the third of the series.

By virtue of another triple-figure knock, the 31-year-old Mitchell joined an elite list of cricketers. The right-hander is now only the fourth player in the 21st century to score three back-to-back Test centuries as an overseas player on a tour of England. In this way, the star NZ player has joined Rahul Dravid (2002, 2011), Mohammad Yusuf (2006) and Steve Smith (2019) in an elite list of batters to have achieved this rare feat.

In addition, Mitchell became the first Kiwi player in 73 years to score in excess of 400 runs in a Test series against England. Courtesy of his impressive 109, NZ were all-out for 329 and have now dismissed half of the English side for 55 as hosts are in a spot of bother.

Will Williamson & Co. salvage some pride and win the final Test? Only time will tell...