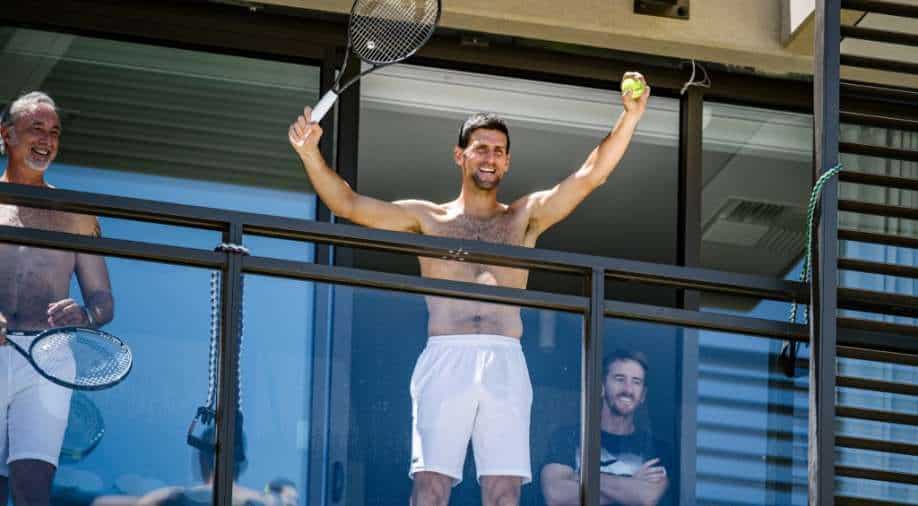 Novak Djokovic on Wednesday lashed out at the criticism of his letter to Australian Open chief Craig Tiley in which the Serb suggested easing of COVID-19 quarantine restriction as the world number one tennis star said his intentions were "misconstrued”.

Novak Djokovic on Wednesday lashed out at the criticism of his letter to Australian Open chief Craig Tiley in which the Serb suggested easing of COVID-19 quarantine restriction as the world number one tennis star said his intentions were "misconstrued”.

A total of 72 players have been confined to their hotel rooms for 14 days and are unable to train for the Grand Slam which is scheduled to be held from February 8-21. The move to quarantine the players come after passengers on three charter flights carrying them to Melbourne tested positive for coronavirus.

Djokovic, according to reports, asked Tiley for reduced isolation periods while moving players in hard quarantine to "private houses with tennis courts". The development received staunch criticism from Australians.

However, Tiley confirmed that they were suggestions and not demands by Djokovic.

"My good intentions for my fellow competitors in Melbourne have been misconstrued as being selfish, difficult and ungrateful," Djokovic who is isolating in Adelaide along with other top players, said in a lengthy statement.

"This couldn't be farther from the truth.

"... at times when I see the aftermath of things, I do tend to ask myself if I should just sit back and enjoy my benefits instead of paying attention to other people's struggles."

Tennis coach Daniel Vallverdy told Reuters that players in hard quarantine should get prime practice times and matches scheduled in cooler hours of the matchday.

"I've earned my privileges the hard way... it is very difficult for me to be a mere onlooker knowing how much every help, gesture, and good word mattered to me when I was small and insignificant in the world pecking order," the Serbian ace said.

"Hence, I use my position of privilege to be of service as much as I can where and when needed."

Djokovic went on to express his gratitude towards the Australian government and Australian Open organisers to allow the players to participate amid the pandemic.

"Things in the media escalated and there was a general impression that the players (including myself) are ungrateful, weak and selfish because of their unpleasant feelings in quarantine," he added.

"I am very sorry that it has come to that because I do know how grateful many are. We all came to Australia to compete. Not being able to train and prepare before the tournament starts is really not easy.

"None of us ever questioned 14 days of quarantine despite what is being said by media outlets."