'Nothing to lose' Lazio topple Inter to go second behind Juventus 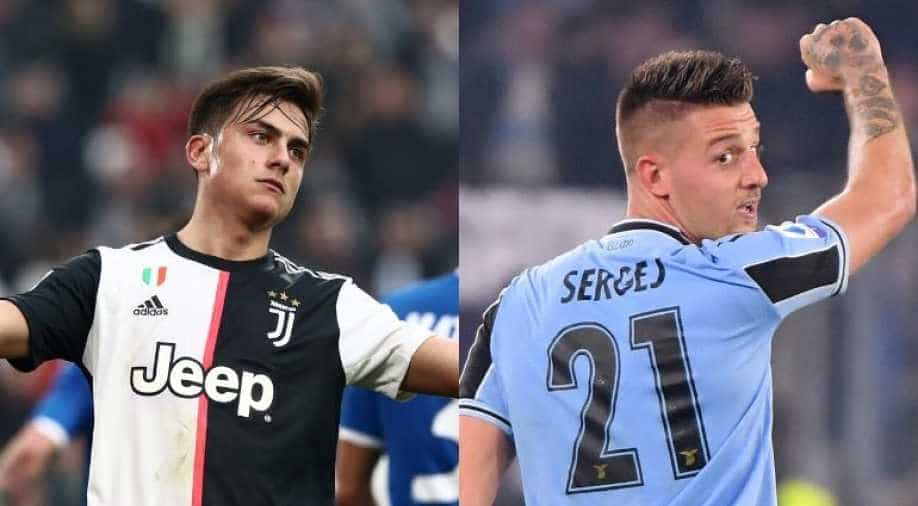 Juventus reclaimed pole position thanks to Paulo Dybala and Juan Cuadrado's goals as the Turin giants rediscovered their winning form 2-0 at home against Brescia.

Lazio coach Simone Inzaghi gave warning his side are ready to fight for their first Serie A title since 2000 after moving into second in Serie A on Sunday, just one point off leaders Juventus after a come-from-behind 2-1 win over Inter Milan.

Juventus reclaimed pole position thanks to Paulo Dybala and Juan Cuadrado's goals as the Turin giants rediscovered their winning form 2-0 at home against Brescia.

Inter Milan dropped from the top spot to third -- three points behind the eight-time reigning champions -- after falling to just their second defeat of the season.

"We need to stay humble and focused but I'm sure we will succeed. We have nothing to lose," said Inzaghi.

"We know that Juventus and Inter are two great teams and we will do everything to fight to the end, knowing that it will be very difficult."

In a fiery clash in the Stadio Olimpico defender, Ashley Young broke through just before the break with his first Serie A goal for Inter Milan after his move from Manchester United.

The 34-year-old got his foot to tap-in off a rebound after Thomas Straskosha had cleared from former Lazio player Antonio Candreva.

A Stefan de Vrij foul on Ciro Immobile allowed the Serie A top scorer to slot in his 26th goal in 24 games this season, five minutes after the break.

Sergej Milinkovic-Savic snatched the winner after 69 minutes amid confusion in front of goal.

"We gifted Lazio two goals," said Inter coach Antonio Conte as the northerners fell to their second defeat after Juventus in October.

Lazio extended their unbeaten run to 19 games as they target their second Scudetto, with a return to Champions League football on the cards for next season.

In Turin, Argentine forward Dybala curled in a perfect free-kick six minutes before the break, shortly after Brescia's Florian Aye was sent off for two yellow cards in quick succession.

Colombian Cuadrado tapped in the second from close range after a Blaise Matuidi cross with 15 minutes to go, to get back winning after two away defeats.

"We did what we had to do," said Juve coach Maurizio Sarri.

"Cristiano had to rest, he cannot play 75 games a year between the national team and club, we decided to let him recuperate," said Sarri.

Sarri said 35-year-old skipper Chiellini had been desperate to get onto the pitch, after nearly six months off with a cruciate knee injury.

"He said it yesterday, he has made six months of sacrifices and wanted to play the last quarter of an hour, and I found myself next to him when he had already taken off his tracksuit."

The champions did not have it all their own way against Brescia, who stay second-from-bottom, seven points from safety after extending their winless run to nine games.

Enrico Alfonso went off after just 10 minutes following a knock to the head, with substitute Brescia keeper Lorenzo Andrenacci pulling off some fine saves.

In Sardinia, Napoli got back to winning ways with a Dries Mertens' 65th-minute goal sealing a 1-0 success over Cagliari.

The Belgian completed a give-and-go with Elseid Hysaj with the ball curling in with a deflection off the post.

It was the 32-year-old's 120th goal for Napoli, one short of Marek Hamsik's all-time record, and five ahead of club legend Diego Maradona.

Gattuso's side overtakes Cagliari, moving up to eighth, two points off the Europa League berths, as Cagliari drop to 11th place.

Hellas Verona missed the chance to close in on fifth-placed Roma, who fell 2-1 at Atalanta on Saturday, with a goalless draw at Udinese.

In the Champions League race, Atalanta is fourth, six points ahead of Roma.

Verona, in the sixth, occupies the final Europa League spot ahead of Parma on goal difference but stay four points behind Roma.