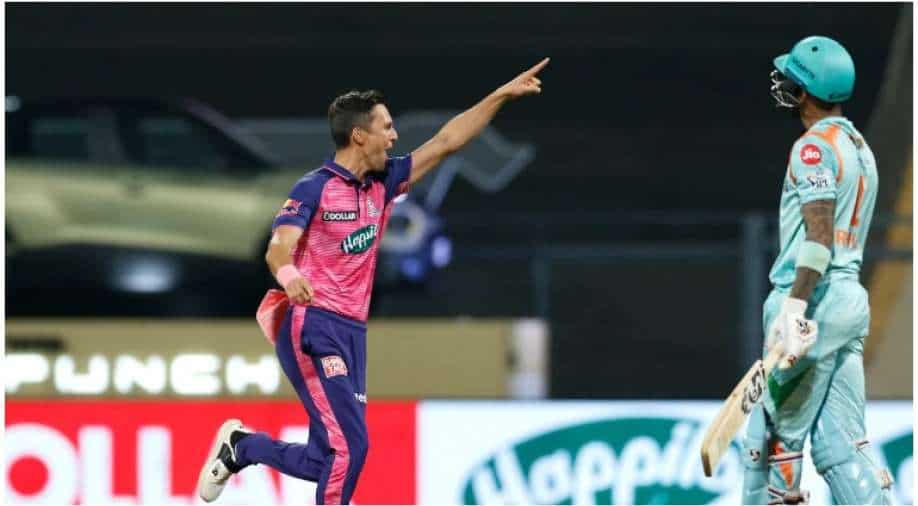 While many thought it was Sri Lanka's former pacer and RR's current fast bowling coach Lasith Malinga's idea to ask Trent Boult to bowl an inswinger from round the wicket to KL Rahul, the Kiwi pacer revealed the real mastermind:

Trent Boult was breathing fire in Rajasthan Royals' (RR) face-off versus KL Rahul-led Lucknow Super Giants (LSG) in match 20 of the IPL 2022 edition on Sunday evening (April 10). After Sanju Samson-led RR were asked to bat first and they rode on Shimron Hetmyer's 59 to post 165-6, Boult's opening spell tilted the game in RR's favour before they eventually won the close contest by three runs, at the Wankhede Stadium, Mumbai.

As Rahul & Co. came out to bat in their 166-run chase, the Lucknow skipper was left gobsmacked with an absolute peach of an inswinger from the New Zealand speedster. Thus, he was dismissed off the first ball of the run-chase before Boult also claimed Krishnappa Gowtham's wicket. He ended with 4-0-30-2 whereas Yuzvendra Chahal returned with 4 for 41 to take RR to a 3-run win.

Here's the video of Rahul's dismissal by Boult:

While many thought it was Sri Lanka's former pacer and RR's current fast bowling coach Lasith Malinga's idea to ask Boult to bowl an inswinger from round the wicket, the Kiwi revealed the real mastermind and credited his compatriot James Neesham -- who was warming the RR bench -- for the memorable wicket.

At the post-match presentation, Boult revealed, "It was a late call at breakfast, and it was Jimmy Neesham's idea to go with that plan against KL Rahul. I don't want to give him too much credit (laughs). My role with the new ball is to take as many wickets as possible. It's a pretty simple game for me at the top and get it to swing. The humidity and the overheads assisted it."

Meanwhile, Rahul opined on the unplayable delivery and said, "I didn't see it (the ball that got him from Boult), if I did I could have done something about it. Have to give it to him. Was a good ball."