'No war in Ukraine' protest at Beijing Winter Olympics 2022 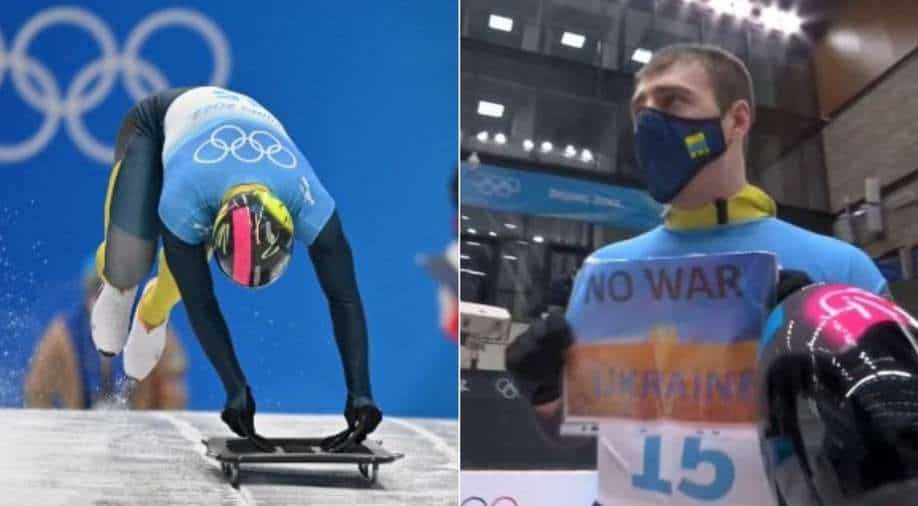 Vladyslav Heraskevych could face repercussions and be sanctioned by IOC for the protests. Photograph:( Twitter )

Ukrainian athlete at the Winter Olympics 2022, which is underway in China, has raised his voice against the escalating tensions between Russia and Ukraine.

Amid calls for diplomatic talks, the situation appears to have deteriorated after the United States President Joe Biden used the word "world war".

On Thursday (February 10), Biden urged Americans to immediately leave Ukraine as the US-Russia tensions are at their highest since the Cold War.

In a pre-recorded interview with NBC News, Biden said, "American citizens should leave now. We're dealing with one of the largest armies in the world. It's a very different situation and things could go crazy quickly."

He said that under no circumstances would he send US troops to Ukraine, even to rescue Americans in case of a Russian invasion. "That's a world war. When Americans and Russians start shooting one another, we're in a very different world," he said.

Although Russia has denied it, but the Western countries are fearing that President Vladimir Putin is planning to invade Ukraine with amassing over 130,000 Russian soldiers are grouped in dozens of combat brigades near the border with Ukraine.

Meanwhile, the 'no war in Ukraine' call has been raised at the Beijing Olympics after as an Ukrainian competitor Vladyslav Heraskevych used a skeleton race to protest.

The 23-year-old athlete showed a sign that read "No war in Ukraine" written in yellow and gold to the television cameras before taking part in the third heat.

Heraskevych told reporters at the Yanqing National Sliding Centre, "Like any normal person, I don't want war, I want peace in my country. That's my position, I fight for peace. At home in Ukraine, things are really nervous now.

He added, "There is a lot of news about guns, weapons and armies surrounding Ukraine. It's not okay. Not in the 21st century. Before it all starts, I wanted to show my position to the world."

Although, Heraskevych could face repercussions and be sanctioned by the International Olympic Committee (IOC) under its rule 50 which forbids athletes from making political protests at the Games.

While commenting on the same, he said, "I think the Olympics also fights for peace, for united countries not for wars, so I hope they (IOC) will be with me in this. Nobody wants war," he added.