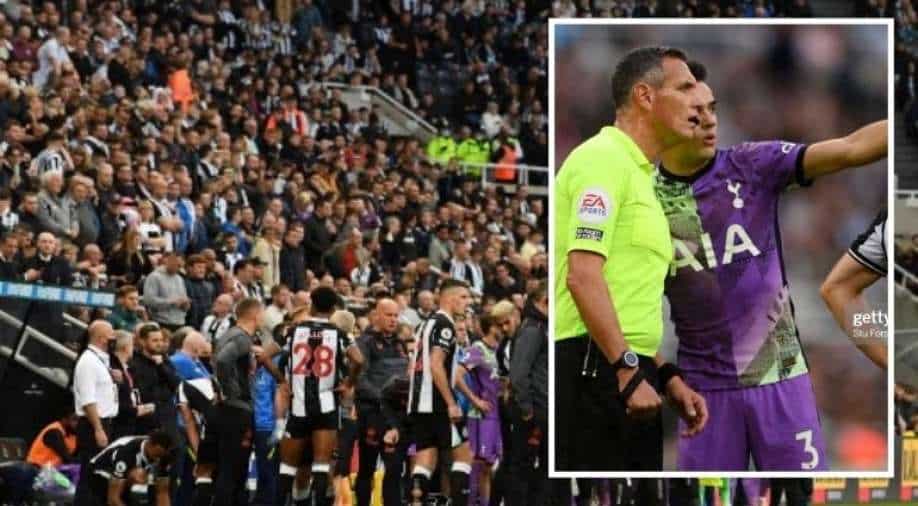 In the 40th minute, the match was stopped when players called for the medics to assist a supporter in the crowd

The Premier League match between Newcastle United and Tottenham Hotspur at St James' Park on Sunday (October 17) was suspended after a fan collapsed in the crowd as shocking photos and videos of the incident were circulated on social media forums.

In the 40th minute, the match was stopped when players called for the medics to assist a supporter in the crowd. Tottenham players, especially Sergio Reguilon and Eric Dier, made the match officials aware. Defender Reguilon urged referee Andre Marriner to halt play, his teammate Dier immediately ran to the Newcastle dug-out calling and gesturing for a defibrillator.

The supporter who was in need of urgent medical assistance has been stabilised and is on their way to hospital.

Our thoughts are with them. 🖤🤍

Newcastle's official Twitter handle informed that the fan has been stabilised and is on its way to the hospital.

Spurs were leading 2-1 in the 41st minute when referee Andre Marriner halted the match after players brought the medical emergency in the crowd to his attention.

Eric Dier just sprinted to the Newcastle dug-out calling and gesturing for a defibrillator. Incident in the crowd on the far side in the stand. Newcastle medic rushed across to help the fan. Game stopped. #NEWTOT

West Ham fan here but huge respect to Sergio Reguilon telling the ref about the situation and Eric Dier running to the dugout to tell the medical team to get the defibrillator. Both acted very quick to try save someone’s life. Hope he makes a quick recovery.

Sergio Reguilon alerting the referee and Eric Dier calling for a defibrillator after a medical emergency in the stands at Newcastle. 👏 pic.twitter.com/txSZ3oxhR7

During the match, Harry Kane scored his first Premier League goal of the season as Tottenham Hotspur overcame Newcastle United 3-2.

Newcastle, spurred on by a buoyant atmosphere in their first game since being taken over by a Saudi Arabia-led consortium, flew out of the traps and went ahead after just 108 seconds when Callum Wilson headed in from a Javi Manquillo cross.

But the bright start soon fizzled out as Spurs hit back in the 17th minute through Tanguy Ndombele, who lashed home from the edge of the box after being played in by Sergio Reguilon.

Things got worse for the hosts five minutes later when Pierre-Emile Hojbjerg played an excellent ball over the Newcastle defence and Kane beat the offside trap to smartly dink it over Karl Darlow.

Son Heung-min added a third from close range in first-half stoppage time before Newcastle were reduced to 10 men in the 83rd minute when Jonjo Shelvey saw red for a second booking. An own-goal from Eric Dier set up a tense finish but Spurs held on.

Spurs moved up to fifth in the standings with 15 points from eight games. Newcastle are second from bottom with three points.