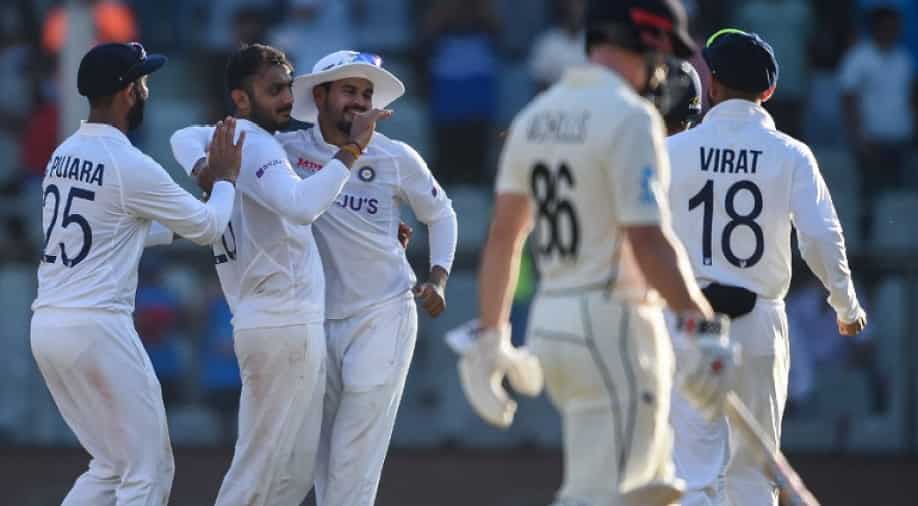 New Zealand are on the verge of facing a massive defeat in the ongoing second Test against India at the Wankhede Stadium in Mumbai after being handed a whopping target of 540 runs in their second innings. New Zeland spinner Ajaz Patel created history during India's first innings of the Mumbai Test with a ten-wicket haul, however, the Kiwis let him down with their poor show with the bat.

Patel claimed all ten wickets in India's first innings as the hosts managed 325 runs on the board. However, New Zealand failed to capitalise as they were bundled out for a paltry 62 runs in their first innings and ended up conceding a lead of 263 runs. R Ashwin and Mohammed Siraj combined to run riot against the New Zealand batting line-up with seven wickets between them.

New Zealand recorded their lowest total against India in a Test innings at the Wankhede Stadium in Mumbai on Saturday during Day 2 of the ongoing second Test between the two teams. None of the Kiwi batters managed to show resistance as the likes of Mohammed Siraj and R Ashwin ripped through New Zealand batting line-up. Kyle Jamieson top-scored for New Zealand with 17 runs.

New Zealand's previous lowest Test total against India was 94 which came in the Hamilton Test in 2002. India were bowled out for 99 runs in their first innings but bounced back strongly with the ball to skittle out the Stephen Fleming-led side on 94 in their first innings. India then posted a total of 154 runs in their second innings but ended up losing the game by six wickets as New Zealand chased down the target of 160 runs.

Also Read: Kohli in disbelief after getting bowled by Rachin Ravindra in 2nd Test against New Zealand - WATCH

India had bowled out New Zealand for 101 runs in the 4th Test of the four-match series between the two sides in 1968. Chasing a target of 374 runs, New Zealand were bundled out for 101 as Bishan Singh Bedi and Erapali Prasanna picked up seven wickets between them. India went on to clinch the series 3-1 to register their first Test series win overseas.