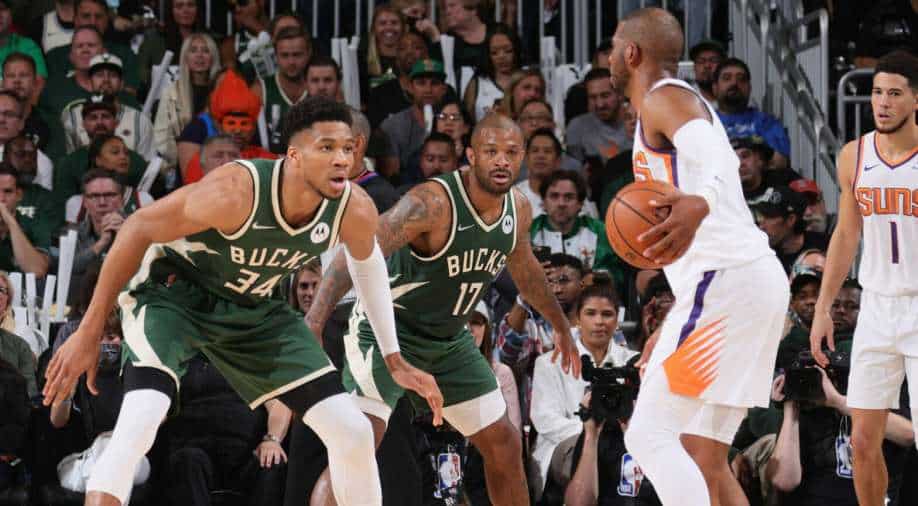 The headliner of the game though came only with 17 seconds left. Suns were down by a point with the game online. Jrue Holiday stripped the in-form Booker to toss the ball for Giannis Antetokounmpo to finish a highlight-reel-worthy alley-oop.

In what was yet another fitting game for a Finals series, the stars from Milwaukee Bucks and the Phoenix Suns descended on the floor in Phoenix for Game 5 on Saturday night. But Devin Booker’s 40-point game wasn’t enough as the Suns were handed a 123-119 loss by Bucks, and the series tipped in favour of Bucks 3-2.

In what was a roller-coaster of a game, the Suns took a 16-point lead in the first quarter to eventually see the Bucks erase that and take lead going into halftime. Bucks outscored Suns in the middle two quarters 79-53, effectively handing a 10-point cushion to the visitors going into the last.

The headliner of the game though came only with 17 seconds left. Suns were down by a point with the game online. Jrue Holiday stripped the in-form Booker to toss the ball for Giannis Antetokounmpo to finish a highlight-reel-worthy alley-oop.

This was the first time this postseason that the Suns did not win after leading by double digits. They were 13-0 prior to Game 5. Booker also got his name up against a tough stat to live with; becoming the first player in Finals history to lose back-to-back games despite scoring 40+ points in both games. Chris Paul (21 pts) and Deandre Ayton (20 pts) combine couldn’t help the Suns cross the line.

The Bucks’ Big 3 got together when it mattered the most. Giannis Antetokounmpo (32 pts), Khris Middleton (29 pts), and Jrue Holiday (27 pts) combined for 88 points becoming the fifth trio in NBA Finals history to each score 25 points on 50 per cent shooting.

Antetokounmpo was happy with the team effort that handed them the crucial home-court advantage going into Game 6. “We kept our composure down 16 and we kept fighting,” said Antetokounmpo. “This is the NBA Finals, so you got to give everything you got and that’s what the team did tonight.”

Booker was stoic while talking about the 16-point lead that the Suns gave away. “We came out and did what we intended to do, get off to a great start, and we let it go,” said Booker. “They stayed resilient and they kept playing through. Tough loss for us.”

The series moves back to the Fiserv Forum in Milwaukee for Game 6. But going by the last two games that have been decided by six points or less, it would be interesting how Suns respond to the pressure of having to win the remaining games to win the championship. Bucks would look the end bring their first title in 50 years on Wednesday.

Watch the Game 6 of the NBA Finals on Wednesday at 6:30 AM on Disney+Hotstar, Star Sports Selects, and NBA League Pass