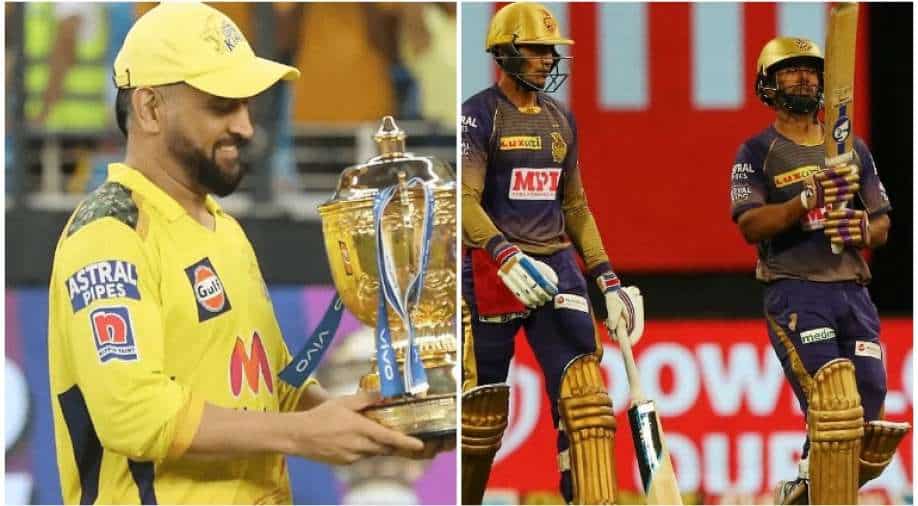 In the IPL 2021 final, CSK beat KKR by 27 runs to win their fourth title. Ex-KKR player recently revealed his chat with MS Dhoni after the finale in Dubai.

Talking about the KKR outfit, they were off to a forgettable start in the first leg of IPL 2021, in India. Being in the bottom-half, they revamped in style when the second and final leg kicked off in the UAE. Morgan & Co. rode on Venkatesh Iyer, Shubman Gill, Rahul Tripathi, Varun Chakravarthy and few others to enter the finale, where they eventually lost to the Chennai-based franchise.

Recalling the finale, Tripathi -- who has now been sold to the Sunrisers Hyderabad (SRH) at the IPL 2022 mega auction -- shared the chat he had with Dhoni after the game.

“I had a hamstring injury and therefore, I came in lower down the order. I couldn’t score runs (2), I was really struggling to run between the wickets. After I got out, Mahi bhai tapped on my back and said: “Koi nai, aj tumhara day nahi tha, But tune hundred percent try kiya”(It wasn’t your day, but you gave your hundred percent). I was feeling very down since we lost the final, but Mahi bhai came after the game also and spoke to me for a minute or so," Tripathi told News18.

“I still remember when I was on my IPL debut, he (Dhoni) came and said, “jaise nets me khel rahe ho, bilkul waise hi khelo” (Play as you play in nets). He treats every player as his younger brother. He guided me throughout the tournament in 2017. Sometimes he scolded me as well. ‘Push hard….do this’. Like when I was playing for Rajasthan Royals and KKR, I used to consult him whenever I got time. “Kya kar rahe ho,”(What are you doing these days) he always used to ask me,” said the 30-year-old.

At the recently-concluded mega auction, Tripathi made heads turn with as many as three franchises joining a bidding war for him. KKR tried their best to reclaim his services and were involved in an intense bidding clash with CSK and SRH before the right-hander was sold to the latter for INR 85 million (INR 8.5 crore).

Tripathi would hope to set the stage on fire for the Orange Army in the IPL 2022 edition.