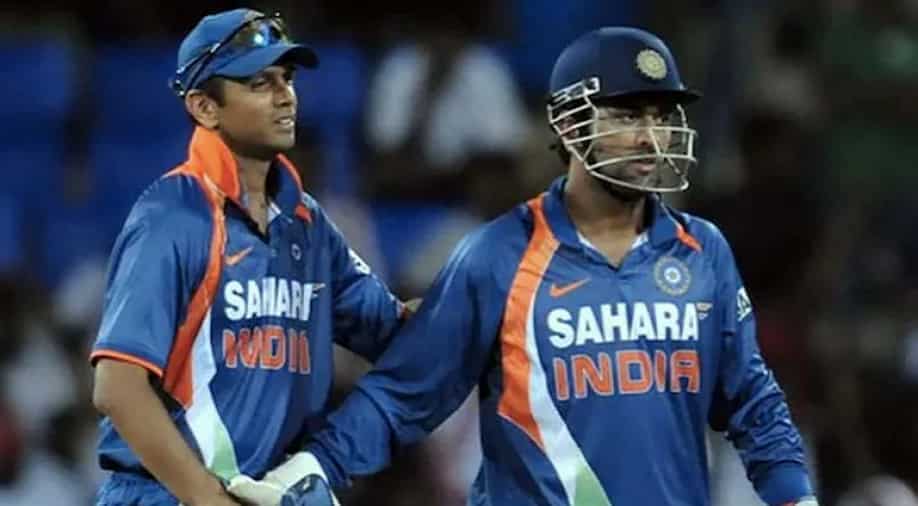 Can we get to see Dhoni and Dravid together in Indian team's backroom staff? Photograph:( AFP )

Ravi Shastri's tenure as the head coach of the Indian men's cricket team is set to come to an end soon. His current contract expires after the conclusion of the upcoming T20 World Cup 2021 and the Board of Control for Cricket in India (BCCI) will be looking to announce his replacement soon after his exit.

Legendary Rahul Dravid's name has been doing the rounds for the post of India head coach after Shastri. Several former cricketers and experts have also given their backing to the former India captain, who has coached India U-19 and India A sides in the past. Earlier this year, Dravid also served as India's stand-in head coach for the Sri Lanka tour in Shastri's absence.

Former India chief selector MSK Prasad has also backed Dravid to join India's backroom staff after Shastri. Prasad also wants MS Dhoni to take a mentorship role with the team alongside Dravid. The former chief selector said it will be fantastic for the Indian team to have the iconic duo of Dravid and Dhoni in coaching and mentorship role.

“I would definitely feel that going forward it should be Rahul Dravid and MS Dhoni. Rahul more as a coach and MS as a mentor. Dhoni and Rahul in the Indian team will be a fantastic thing to watch out for post-Ravi Shastri’s era,” Prasad was quoted as saying by Times of India in an interview.

Shastri had taken over as the head coach of the Indian team in 2017, replacing legendary Indian spinner Anil Kumble after the country's defeat in the final of Champions Trophy 2017. He formed a formidable partnership with captain Virat Kohli at the helm and the duo led India to greater heights.

While India failed to win a major ICC trophy under Shastri, Kohli & Co. became the first Asian side to beat Australia in a Test series in their own backyard in 2018 before Ajinkya Rahane-led India repeated the feat in Border-Gavaskar Trophy 2020-21.

India also reached the semi-final of the ODI World Cup in 2019 and the final of the inaugural edition of the World Test Championship earlier this year under Shastri.