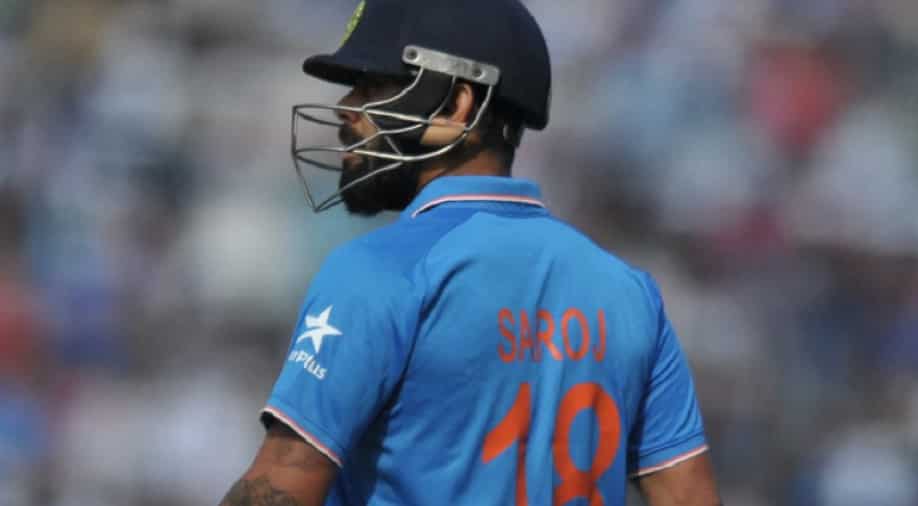 Virat Kohli sporting his mother's name on the back of his jersey in an ODI against New Zealand. Photograph:( AFP )

MS Dhoni-led Indian team had sported the names of their mothers on the back of their jerseys to pay tribute to them in an ODI game against New Zealand in 2016.

Mother's Day is celebrated across the globe on May 08 as a tribute to all mothers around the world. Mothers are real-life heroes, life-givers and a child's first teachers. Tributes and messages have been pouring in on social media as the world celebrates motherhood and maternal bonds.

The Indian cricket team had once come up with an incredible gesture to pay tribute to their mothers during an ODI game against New Zealand in 2016. The MS Dhoni-led Indian side proudly sported the names of their mothers on their jerseys during the fifth ODI of the home series against the Kiwis at the Dr Y.S. Rajasekhara Reddy ACA-VDCA Cricket Stadium in Visakhapatnam.

The likes of Virat Kohli, Rohit Sharma, Dhoni and other members of India's squad took the field sporting jerseys which had their mothers' names instead of their names on the back. The brilliant gesture had been appreciated by many and had touched the hearts of many as it sent out a great message.

Also Read: Delhi Capitals squad in isolation after another COVID-19 case detected in their camp - Report

Speaking at the toss, Dhoni was asked about the gesture and he compared a mother's contribution to one's life to that of a soldier's. “It was always how emotionally I was connected to my mom. The mother’s contribution is something which we don’t appreciate it that often,” Dhoni had said at the game before comparing mothers to soldiers.

#TeamIndia sporting their mothers' names on the jersey in the 5th and final ODI #INDvNZ pic.twitter.com/pWcMAKMchB

India had thrashed New Zealand by a whopping 190 runs in the game. Batting first, India rode on opener Rohit Sharma's brilliant 70 off 65 balls before Kohli notched up a crucial 65 off 76 deliveries. Skipper Dhoni played a gritty knock of 41 runs off 59 balls to help the Men in Blue post a fighting total of 269/7 on the board in 50 overs.

In reply, New Zealand were skittled out for a paltry 79 as the Kiwis lost the game by a huge margin. Amit Mishra was the star with the ball for India as he bagged a memorable five-wicket haul to run through the Kiwi batting line-up and wrap up a dominant win for the hosts.