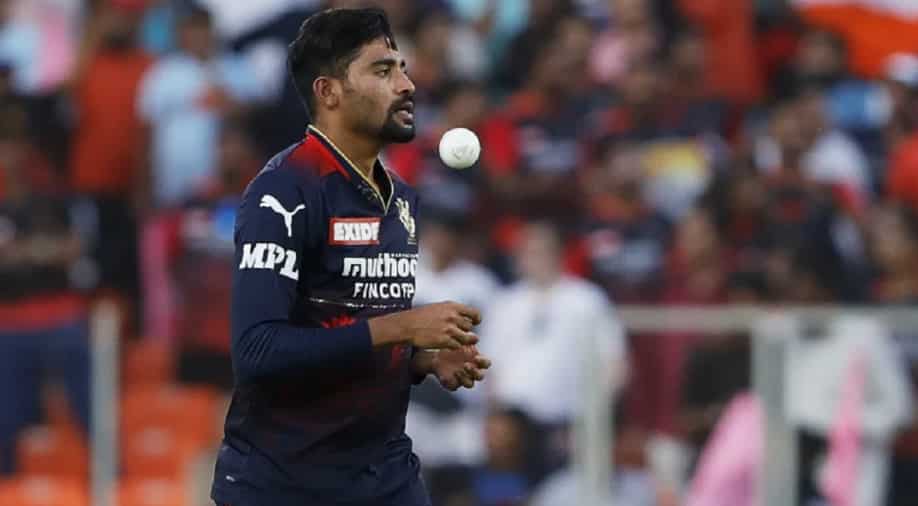 Royal Challengers Bangalore (RCB) pacer Mohammed Siraj created an unwanted record in his side's clash against Rajasthan Royals in the 2nd Qualifier of IPL 2022 on Friday.

Royal Challengers Bangalore (RCB)'s campaign in the ongoing Indian Premier League (IPL) 2022 came to an end on Friday (May 23) after a 7-wicket defeat against Rajasthan Royals (RR) in the 2nd Qualifier at the Narendra Modi Stadium in Ahmedabad. On a wicket that was helping pace bowlers, RR fast bowlers did well to restrict RCB on 157 runs before Jos Buttler's stunning ton powered them to a comprehensive victory to help them secure a spot in the final.

RCB bowlers had a forgetful outing in the game as they were taken to the cleaners by Buttler, who single-handedly helped RR chase down the 158-run target and storm into the final. RCB pacer Mohammed Siraj was expected to get his team off to a good start with the ball on a track that had pace and bounce. However, he ended up bowling a nightmarish spell.

Siraj managed to bowl only two overs against Rajasthan Royals before being taken off as he ended up conceding 31 runs off the two overs. With the bashing, Siraj also ended up creating an unwanted record as he became the bowler to have been hit for the most number of sixes in a single IPL season.

Siraj conceded as many as 31 sixes in IPL 2022 for RCB and now holds the unwanted record. The Indian pacer had been retained by RCB ahead of the mega auction this year and was expected to play a key role for the franchise, however, he had a season to forget as the pacer finished with just 9 wickets in 15 matches at an economy rate of over 10.

One of the key members of the Indian pace attack across formats at present, Siraj was dropped by RCB in their last league game before being bought back in the Eliminator against Lucknow Super Giants. While he conceded 31 sixes this season, his RCB teammate Wanindu Hasaranga ended up giving away 30 sixes in IPL 2022.

Most sixes conceded by a bowler in a single IPL season:

Talking about the 2nd Qualifier between RCB and RR at the Narendra Modi Stadium on Friday, it was Buttler show as the RR opener dominated the proceedings during his side's run chase and took them over the line without breaking a sweat. RR will now take on Gujarat Titans in the final of the tournament at the same venue on May 29 (Sunday).