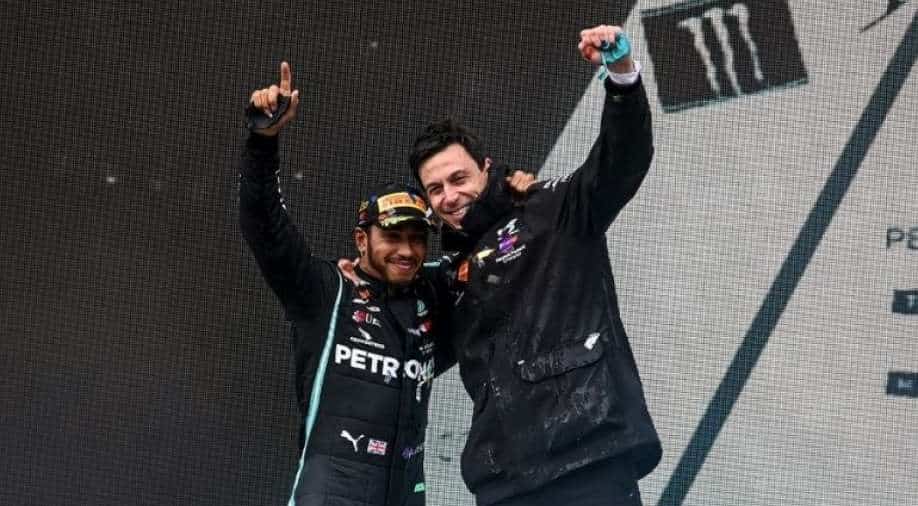 Red Bull's Max Verstappen will be handed his trophy at the ceremony and the top three drivers are obliged to attend the prizegiving under article 6.6 of the Formula One sporting regulations.

Lewis Hamilton may never get over the pain of being 'robbed' of a record eighth Formula One title, Mercedes team boss Toto Wolff said on Thursday in comments that raised doubts about the driver's future in the sport.

The Austrian, speaking to reporters for the first time since Sunday's race in Abu Dhabi and after Mercedes dropped plans to appeal, said he and Hamilton would not be attending the FIA's gala awards in Paris that evening.

Red Bull's Max Verstappen will be handed his trophy at the ceremony and the top three drivers are obliged to attend the prizegiving under article 6.6 of the Formula One sporting regulations.

Hamilton lost out to Verstappen after the Dutch driver overtook him on the last lap at Yas Marina, benefiting from a sudden change to the safety car procedure that allowed racing to resume.

"It's going to take a long time for us to digest what has happened on Sunday. I don`t think we will ever come over it, that`s not possible," said Wolff.

"And certainly not him (Hamilton) as a driver. I would very much hope the two of us and the rest of the team we can work through the events... But he will never overcome the pain and the distress that was caused on Sunday."

Hamilton spoke briefly after Sunday's race to 2009 world champion Jenson Button before the podium ceremonies but did no media post-race and has not spoken publicly since.

He also avoided saying anything after being knighted at Windsor Palace on Wednesday.

Asked directly whether Hamilton, who turns 37 in January and has two years remaining on his contract, would be back next year, Wolff indicated that was not a certainty.

"I would very much hope Lewis continues racing because he is the greatest driver of all time," he said.

"As a racer his heart will say I need to continue because he's at the peak of his game," he added. "But we have to overcome the pain that was caused upon him on Sunday. He is a man with clear values."

Mercedes won the constructors' title for an unprecedented eighth year in a row and Wolff said technical head James Allison would be in Paris to collect the trophy on behalf of all the workforce.

Wolff was confident Mercedes could have won a legal battle but there was "a difference between right and obtaining justice."

He said every decision was taken with Hamilton.

"It was tremendously hard for him and for us as a team to withdraw the appeal, because we were wronged," he added.

"My soul and my heart cries with every bone that this should have been judged in the right way."

Wolff said there had been no contact with race director Michael Masi, who made the safety car decision, since Sunday.

"I`m not interested in having a conversation with Michael Masi," he said.

"The decisions that have been taken in the last four minutes of this race have robbed Lewis Hamilton of a deserved world championship. He won the start and he never gave the lead away again.

"Robbing him on the last lap of the race is unacceptable... my values, my sense of integrity, just isn`t compatible with the decisions that have been made on Sunday."