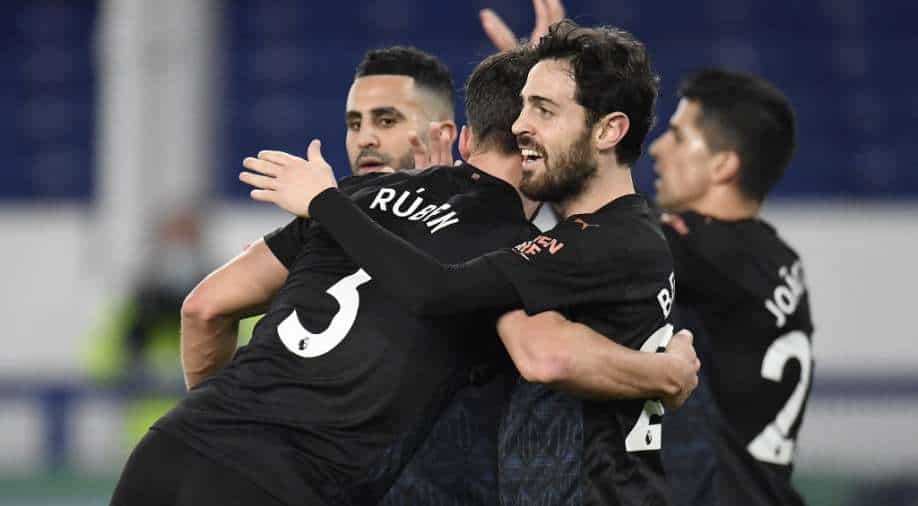 Everton manager Carlo Ancelotti said he expects Manchester City to cruise to the Premier League title after Pep Guardiola's men opened up a 10-point lead at the top of the table with a 3-1 win at Goodison Park on Wednesday.

Everton manager Carlo Ancelotti said he expects Manchester City to cruise to the Premier League title after Pep Guardiola's men opened up a 10-point lead at the top of the table with a 3-1 win at Goodison Park on Wednesday.

Riyad Mahrez scored the pick of the goals in between Phil Foden and Bernardo Silva's strikes as City extended their English top-flight record winning run to 17 games.

"It is really difficult to say another name in this moment," said Ancelotti when asked if his side had just been beaten by the champions.

"They are in a good form, they have belief and they are strong. We tried to be physical but it is difficult against Rodrigo, (Ruben) Dias and (Aymeric) Laporte."

Richarlison's first-half equaliser was little consolation for seventh-placed Everton, who have now won just one of their last six league games to fall five points behind in the battle for a top-four finish.

"We don't need to have regrets tonight," added Ancelotti as he looked forward to Saturday's Merseyside derby against Liverpool.

"It's a fantastic opportunity. We know how important this game is for our supporters."

This fixture was rearranged from late December due to a coronavirus outbreak affecting multiple players at City that threatened to derail their title challenge.

Guardiola's side were eighth in the table at the time, but have not dropped a point in their 10 league games since to streak clear of the chasing pack.

The visitors were without the in-form Ilkay Gundogan due to a groin injury, while Kevin De Bruyne was fit to return from a hamstring problem but only for a late cameo appearance off the bench.

Sergio Aguero was also among the substitutes, but Gabriel Jesus has failed to make the most of his chance to shine in the absence of the Argentine for most of the season and the Brazilian had another off night in front of goal as he blazed over an early chance.

When the deadlock was broken there was a hint of fortune to it as Foden's shot deflected off Seamus Coleman to leave the helpless Jordan Pickford wrong-footed.

Ancelotti's men had shown no attacking intent until conceding, but were immediately rewarded for pushing forward after falling behind as Lucas Digne's shot came back off the post and ricocheted in off Richarlison.

A moment of the highest quality saw City restore their lead just after the hour mark.

Silva's cushioned pass teed up Mahrez on the edge of the box and his sumptuous curling effort clipped the inside of the far post on its way into the net.

"We have the quality up front but always it comes through the passes," said Guardiola. "We need a little bit more patient, the second goal is an example of that. In the end we have to try and get the players up front in a better position."

The roles were reversed for the visitors' third 13 minutes from time as Mahrez and Jesus picked out Silva on the edge of the box and his shot had too much power for Pickford..

At the other end of the table, Fulham missed the opportunity to close to within four points of survival as Burnley came back from a goal down to salvage a 1-1 draw.

Both sides struck early in the second-half of a largely uneventful game as Ashley Barnes cancelled out Ola Aina's opener for Fulham.

A point for Fulham takes Newcastle's advantage over the bottom three to six points, while Burnley remain eight points clear of the drop zone and edge up to 15th.