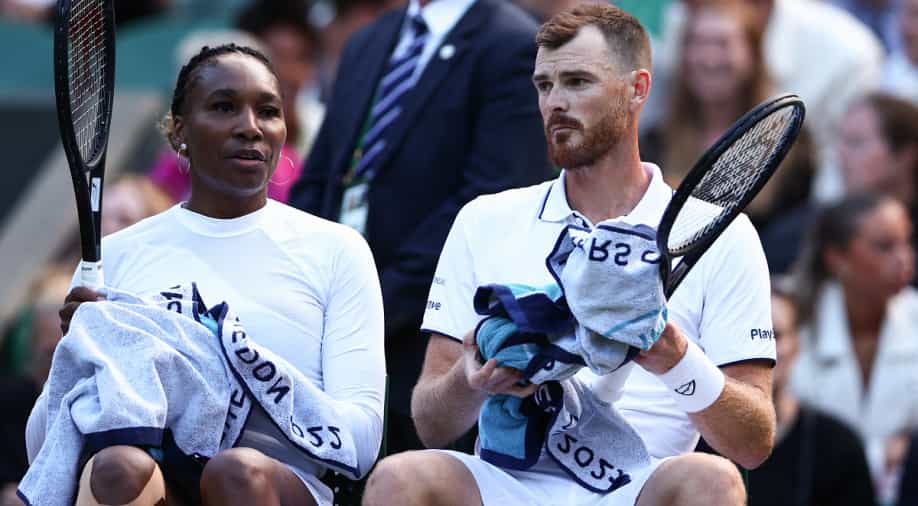 Lure of Wimbledon grass courts too much for Venus Williams to resist. Photograph:( AFP )

Venus Williams revealed she had no plans to play at the ongoing Wimbledon 2022 this year but saw the grass and got excited.

The sight of the All England Club`s manicured lawns proved irresistible for Venus Williams as the multiple Grand Slam champion made an unexpected - and winning - return after almost a year off the court to play at Wimbledon on Friday.

The 42-year-old American, inspired by the sight of younger sister Serena earlier in the week, stepped back onto the court alongside Jamie Murray in the mixed doubles thanks to a wildcard entry and promptly booked a spot in the second round.

"I had no plan to play. I saw the grass and I got excited," Williams said after she and her British partner secured a 6-3 6-7(7) 6-3 win over Alicja Rosolska and Michael Venus.

"I was at the French Open, it`s a beautiful event, but my heart didn`t beat the same way. Not that I could play but ... I had no plans. That`s why I was asking (Murray) last minute."

Murray is a two-time winner of the mixed doubles event at Wimbledon, but this is a title Williams has never claimed in her storied career.

In addition to her seven singles grand slam titles, Williams has won all four grand slam doubles titles - including six at Wimbledon - and the mixed doubles at the Australian and French Open.

"It`s one of the only ones I haven`t won, so I usually put a little more priority here," she said.

"It was definitely super last minute. Just inspired by Serena. Like I said, it was amazing. I just was so happy to have so much help today."

Williams was playing for the first time since losing to Su-wei Hsieh in the first round of the Chicago Women`s Open last August and recently posted training footage online. But she remained coy about her plans beyond Wimbledon. "You never know where I`ll pop up," she said.