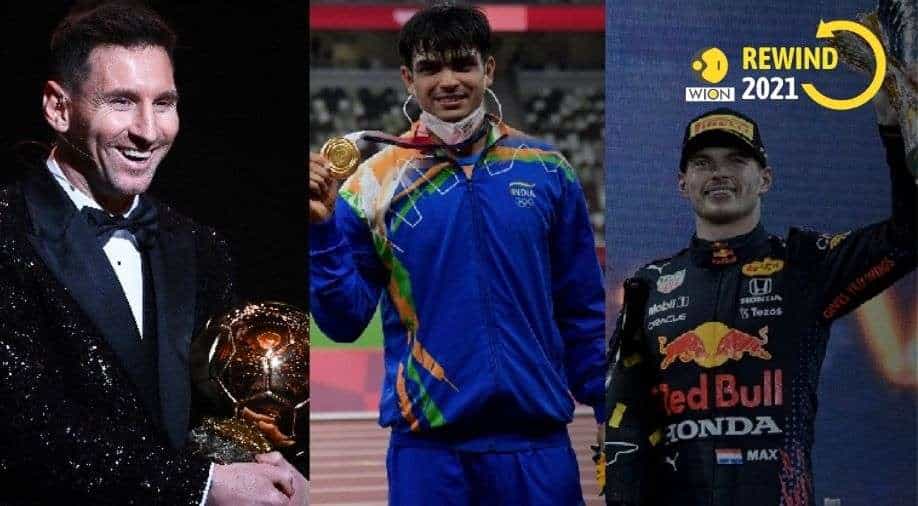 A look back at some of the winners from major sporting events in 2021. Photograph:( AFP )

Lionel Messi clinched a record seventh Ballon d'Or while Neeraj Chopra bagged an elusive gold medal for India at the Olympics. Here is a look at some of the winners across top sporting events in the world in 2021.

2021 was eventful for sports as fans finally returned to the stadiums in many parts of the world while several major events were staged successfully after an unexpected halt last year. It was an year filled with some enthralling sporting action across the globe which saw some familiar, and some new names emerge as champions in their respective disciplines.

While Lionel Messi added another glorious chapter to his footballing legacy with a record seventh Ballon D'Or, India's javelin star Neeraj Chopra etched his name in history with an elusive gold medal at the Tokyo Olympics 2020. Chelsea went on a fairytale run in the Champions League and ended up becoming the champions of Europe while New Zealand became the first-ever World Test Champions in cricket history.

Indian cricket team missed out on an ICC trophy once again this year as the drought extended but the team scripted history Down Under as they went on to record their second successive Test series win in Australia. Despite missing regular skipper Virat Kohli and several other senior players, India clinched the four-match series 2-1.

Here is a look back at some of the top winners from sporting events across the globe in 2021:

2021 started on a brilliant note for the Indian cricket team as the Ajinkya Rahane-led side defeated Australia in their own backyard in the Border Gavaskar Trophy 2020-21 in January. After suffering a humiliating 8-wicket defeat in the series-opener in Adelaide, India bounced back to win the next game before drawing the third Test. India then ended Australia's dominance at The Gabba to clinch the series 2-1. It was India's second successive Test series win on Australian soil.

New Zealand defeated India by eight wickets in the final of the inaugural edition of the World Test Championship (WTC) at the Ageas Bowl in Southampton to become the maiden Test champions of the world. The Kiwis were asked to chase a mere target of 139 runs in their second innings of the summit clash. They rode on superb knocks from Kane Williamson (52*) and Ross Taylor (47*) to win the World Test Championship final.

Neeraj Chopra became the first athlete from India to win a gold medal at the Olympics in track and field. He brought an end to the country's 100-year-long wait for a gold medal in track and field with a stunning throw of 87.58m in the final of men's javelin throw to script history. Neeraj was India's only gold medallist at the Tokyo Olympics this year.

Ace Indian shuttler PV Sindhu became the first Indian woman to win two individual Olympic medals in Tokyo this year. After her silver at the Rio Olympics in 2016, Sindhu clinched bronze at the Tokyo Olympics this year to achieve the elusive feat. Sindhu defeated China's He Bing Jiao in the bronze medal match to finish with back-to-back medals at the Olympics. She is only the second Indian after wrestler Sushil Kumar to have won two individual Olympic medals.

The Indian men's hockey team re-established their credentials as one of the top sides in the world with a superb show in the Tokyo Olympics this year. The Manpreet Singh-led side brought an end to a 41-year-long wait for an Olympic medal by clinching bronze. India defeated Germany 5-4 in the bronze medal match with the help of goals from Simranjeet Singh, Hardik Singh, Harmanpreet Singh (29th) and Rupinder Pal Singh.

Not many had expected Chelsea to win the Champions League as the Blues were struggling in the Premier League when Thomas Tuchel had taken over from Frank Lampard in January this year. Tuchel worked wonders with the squad and inspired them to a memorable Champions League triumph. Chelsea defeated Manchester City 1-0 in the final with the help of the goal from Kai Havertz to lift their second Champions League title.

MS Dhoni-led Chennai Super Kings (CSK) completed a fairytale redemption to clinch their fourth IPL title this year. CSK had finished seventh in the previous season and had failed to qualify for the playoffs for the first time in history. However, Dhoni & Co. went on to script an incredible comeback this year as they became the first team to qualify for the playoffs in IPL 2021 before defeating Kolkata Knight Riders in the final to lift the trophy.

Not many had given Australia a chance at winning the T20 World Cup 2021 but the Aaron Finch-led side went on to claim their maiden title after beating New Zealand in the final. Australia finished second in their group to qualify for the semi-finals before beating Pakistan in a thrilling semi-final to enter the summit clash. They got the better of New Zealand by 8 wickets in the final to lift the T20 World Cup 2021 title.

Argentine legend Lionel Messi beat Bayern Munich forward Robert Lewandowski and Chelsea's Jorginho to bag a record-extending seventh Ballon d'Or this year. Messi had led Argentina to a Copa America triumph and had yet another magnificent season with Barcelona which saw him bagging the top honour for the seventh time in his career.

Red Bull's Max Verstappen beat the great Lewis Hamilton to clinch his maiden Formula One World Championship title this year. Verstappen denied Hamilton a record eight title, overtaking the Mercedes driver in the final lap to win the season-ending Abu Dhabi GP and finish on top of the podium. It was one of the most thrilling finishes to a season in Formula One history.