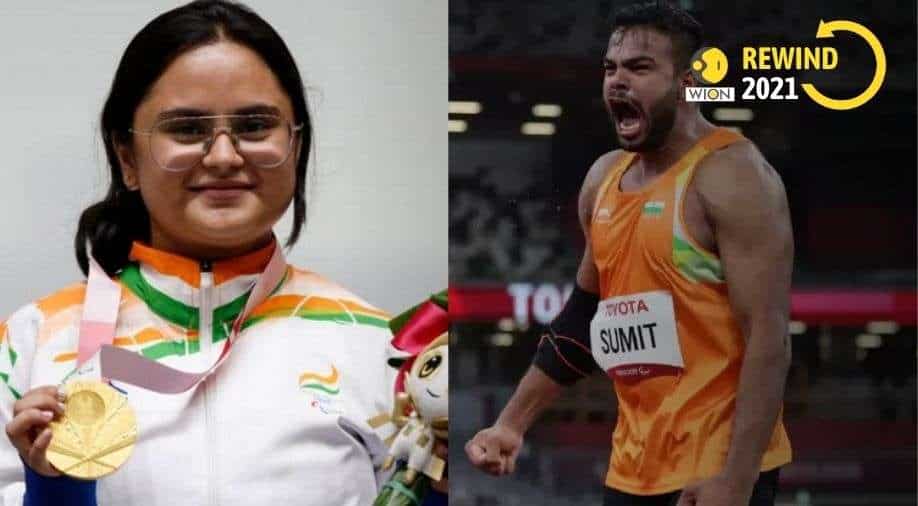 2021 was an eventful year for Indian sports. The country recorded its best-ever campaign at the Tokyo Paralympics with several athletes clinching glory at the grandest stage of them all. While Sumit Antil smashed the world record a thrice in men's javelin throw to win the elusive gold medal, Avani Lekhara became the first Indian woman to win a gold medal in shooting at the Paralympic games.

Bhavinaben Patel won India's first medal at the Paralympics this year with a silver in women's singles table tennis to send the entire country into a frenzy. Her win kick-started what went on to become a memorable campaign for India at the Paralympics as the country finished 24th in the medal tally with a total of 19 medals.

Here is a look at India's golden heroes from Tokyo Paralympics this year:

Avani Lekhara won India's first gold medal at the Tokyo Paralympics this year when she finished on the top of the podium in the women's R2 10m air rifle SH3 final. The para shooter created history by becoming the first Indian woman to win a gold medal at the Paralympics. At the tender age of just 19, Lekhara scored 249.6 in the final to set a new Paralympic record. She didn't stop there and went on to win another medal a couple of days later. The 19-year-old won a bronze in the R8 50m rifle 3 positions SH1 event to return home with multiple medals.

Sumit Antil produced one of the most memorable performances by an Indian in the history of the Paralympics as he shattered the world record as many as five times on his way to clinching the elusive gold medal in the men's javelin throw F64 final. It was an extraordinary display from Antil, who went past the world record of 62.88m a stunning three times before his best throw of 68.55m saw him finish on top of the podium in Tokyo.

The Indian para shooter clinched glory in the men's P4 Mixed 50m Pistol SH1 event by shooting a total of 218.2 points in the final. 19-year-old Narwal suffers from congenital impairment to his right hand and couldn't even raise it to accept his medal during the medal ceremony. However, his left hand was enough for him to return home with his first gold medal from his debut Paralympic campaign for India.

Pramod Bhagat became the first Indian to win a gold medal for India in badminton at the Paralympics. The world no.1 lived up to his favourite tag and defeated Great Britain's Daniel Bethell in straight sets to clinch the elusive gold medal. 2021 was the first time when badminton was included in the Paralympics and Bhagat, a four-time world champion didn't disappoint at all. He etched his name in history books by becoming the first Indian shuttler to win Paralympics gold.

22-year-old Krishna Nagar won India's fifth and final gold medal at the Tokyo Paralympics on the last day of the Games. He got the better of Hong Kong’s Man Kai Chu in the men's singles SL6 final to become the second Indian shuttler after Bhagat to win a gold medal for India at the Paralympics. Nagar was diagnosed with dwarfism at the age of two but never let his short-stature impairment come between his dreams as he brought laurel for the country at the highest level.