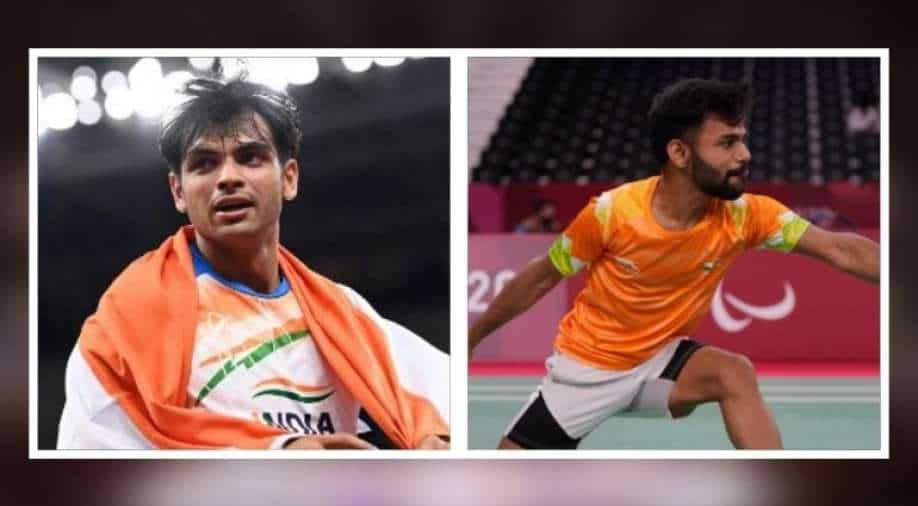 At Tokyo Paralympics the shooting contingent emerged as the biggest contributor with five medals, followed by high jump and badminton with four each.

Javelin thrower Neeraj Chopra won the historic gold medal at the Tokyo Olympics 2020 to lead India to its best-ever haul in the Olympics with seven medals — a gold, two silvers and four bronze medals.

A similar streak was followed in the Tokyo Paralympic Games as the Indian contingent displayed a spectacular performance winning a total of 19 medals — five gold, eight silver, six bronze.

This is India's best-ever Paralympics medal haul as it has eclipsed previous best medals tallies – four each at the Stoke Mandeville and New York Games in 1984 and Rio 2016.

With five medals, the shooting contingent emerged as the biggest contributor, followed by high jump and badminton with four each.

ALSO READ | From Mirabai Chanu to Avani Lekhara: 5 women Olympians who have made a lasting impact with glittering performances

All the medal winners and participants were an inspiration but there were some historic firsts. For example, Bhavina Patel became the first Indian table tennis player to win a Paralympic medal, Harvinder Singh's medal in archery was also exemplary, shooter Avani Lekhara stood out as she became the first Indian woman to win a Paralympic gold medal.

As the cycle of Tokyo Olympics and Paralympics has ended, the entire nation is celebrating all the medal winners and participants. Some of the social media users have hailed the gold medallists as "gold diggers" in an absolutely and utterly positive way.

Here's a quick look at all the gold winners from India at Tokyo Olympic and Paralympic Games 2020:

Neeraj Chopra won India's first-ever individual Olympic gold medal in athletics at the Tokyo Olympics 2020. Neeraj achieved the mark of 87.58 metres in the javelin throw final at the Olympic Stadium.

He also became the only second Indian after shooter Abhinav Bindra to clinch a top podium finish at Olympics.

Avani shot a new Paralympic record of 249.6 in the women's 10m air rifle shooting and equalled the world record score in the category. The 19-year-old outclassed Cuiping Zhang of China and reigning world champion Iryna Shchetnik of Ukraine to win gold.

"I'm so happy I could be the one to contribute it. Hopefully, there's a lot of medals more to come," Lekhara said after winning the elusive medal.

And yes, there was as Avani went on to first Indian woman to win two Paralympics medals after she won a bronze in the women's 50m rifle 3 positions SH1 category.

The performance of our athletes at #Tokyo2020 #Paralympics speeks volume about our determination to take #IndiaSports to the new heights.

Ministry of Youth Affairs & Sports heartily congratulates all the 54 athletes for a phenomenal show at Tokyo. India is proud of you all. 🇮🇳👏 pic.twitter.com/X3mPPbQ4WS

Sumit Antil produced a record-shattering performance as he thrice broke his own world record to win gold in the men's javelin throw F64 category.

In his first attempt, Sumit threw 66.95m and created a world record only to break it again as he threw another record of 68.08m in his second attempt. He went on to create another world record and held the top spot with his best throw of 68.55 in his fifth attempt.

"Neeraj Chopra's medal pressurised me to grab a medal in Olympic but he always motivated me by saying you are too strong and fit. Neeraj has played the biggest role in my achievement," Sumit told ANI.

The 19-year-old Manish created the Paralympic record as he amassed 218.2 points to claim the top spot on the podium.

Another shuttler Krishna Nagar won a gold medal in men’s singles SH6 Badminton to wrap up up India's campaign at the Tokyo Paralympics.

"This is a dream come true. I want to thank my father, mother, uncle, auntie, God, my coaches," said Nagar after winning India's fifth gold at the Games.

"This is the first time that badminton has been added to the Paralympics and I hope that India will keep winning and doing their best at upcoming Games."