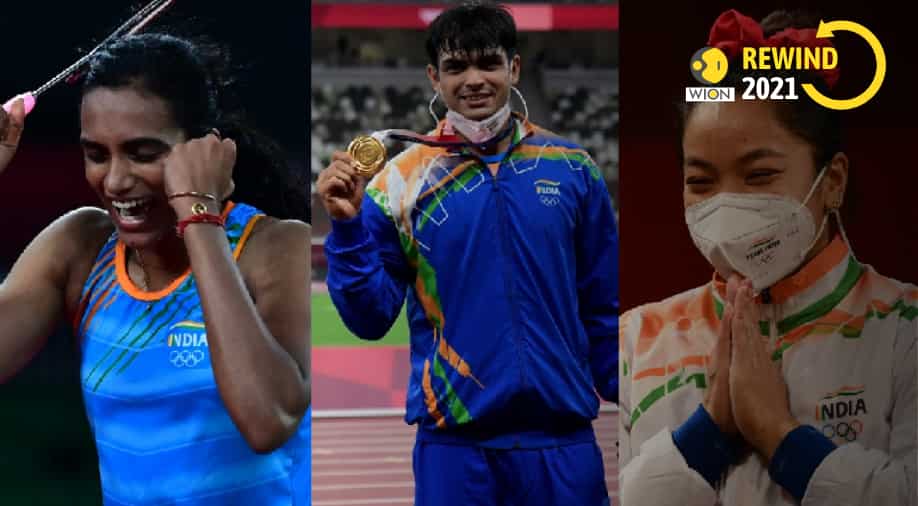 Reliving India's best-ever campaign at the Olympics in 2021. Photograph:( AFP )

India recorded its best-ever Olympics campaign at the Tokyo Games this year with the country winning seven medals including an elusive gold. Here we take a look back at the heroes from India's memorable Olympics campaign.

2021 was an eventful year for Indian sports with the country recording its best-ever medal tally at the Tokyo Olympics 2020. It was a stellar campaign for India at the Olympics with a total of seven medals across six sporting disciplines with Neeraj Chopra becoming only the second Indian to win a historic individual gold medal at the Games.

Chopra won an elusive gold medal in men's javelin throw on the penultimate day of the Tokyo Olympics 2020 to bring joy to millions of Indians across the globe. It was a moment of pride for the countrymen as the national anthem was played in Tokyo with Chopra on top of the podium after a memorable triumph. He brought an end to a long and agonising wait of 100 years for a track and field medal in the Olympics.

While Chopra was India's only gold medallist at the Tokyo Olympics this year, a number of other athletes brought glory to the nation with their heroics at the Games. It was a memorable campaign for India as the men's hockey team also won a medal after 41 years to reestablish their dominance in world hockey. Here is a look back at the heroes who clinched glory for India at the Tokyo Olympics 2020.

Weightlifter Mirabai Chanu opened India's medal tally at the Tokyo Olympics 2020 with an amazing display on the opening day of the showpiece event. Chanu clinched a historic silver medal in the women's 49kg weightlifting category with a brilliant effort. She lifted a total of  202kg (87kg+115kg) to finish second on the podium and create history by ending India's 21-yearlong wait for a medal in weightlifting. She also became the first Indian weightlifter to win a silver medal in Olympics.

Also Read: From Mirabai Chanu to Avani Lekhara: 5 women Olympians who have made a lasting impact with glittering performances

Ace Indian shuttler PV Sindhu proved her class once again at the Tokyo Olympics 2020 where she achieved a stellar feat of becoming the first Indian woman and only the second athlete after Sushil Kumar to win back-to-back Olympic medals. Sindhu beat China's He Bing Jiao 21-13, 21-15 in the bronze medal match in the women's singles event to clinch her second straight medal after her silver at the Rio Olympics 2016.

It was one of the most heartwarming stories of success for an Indian athlete at the Olympics as Lovlina Borgohain, a 23-year-old boxer from a small village in Assam, India scripted history at the biggest stages of them all. Lovlina beat Chinese Taipei's Nien-Chin in the bronze medal match of the women's welterweight (69 kg) category at the Tokyo Olympics 2020. She had lost 5-0 against reigning world champion Busenaz Surmeneli in the semi-final but bounced back to return home with a bronze.

The Indian men's hockey team made the entire nation erupt in joy when they went on to beat Germany 5-4 in a thriller to clinch their first Olympic medal since Moscow Games in 1980. The Indian hockey team once dominated world hockey and has a staggering 12 medals at the Olympics. However, the team had not won a medal for over 40 years before ending the drought in Tokyo this year.

The expectations were high from Indian wrestler Bajrang Punia heading into the Olympics this year as he had performed well in various major tournaments across the globe. Competing in the men's 65kg freestyle wrestling category, Punia went down against Azerbaijan's Haji Aliyev in the semi-finals but beat Kazakhstan’s Daulet Niyazbekov in the bronze medal match to return home with a medal. It was the second medal for India in wrestling at the Tokyo Games and helped them qual their best-ever meal haul of six in a single edition of the Olympics.

Neeraj Chopra scripted history at the Tokyo Olympics this year by bringing an end to India's long and agonising wait of over a hundred years for a medal in athletics/track and field. With a monstrous throw of 87.5m in the final of the men's javelin throw event, Chopra became only the second Indian after Abhinav Bindra to win individual gold at the Olympics. His gold medal triumph saw India record its best-ever Olympics medal tally at the Tokyo Games.