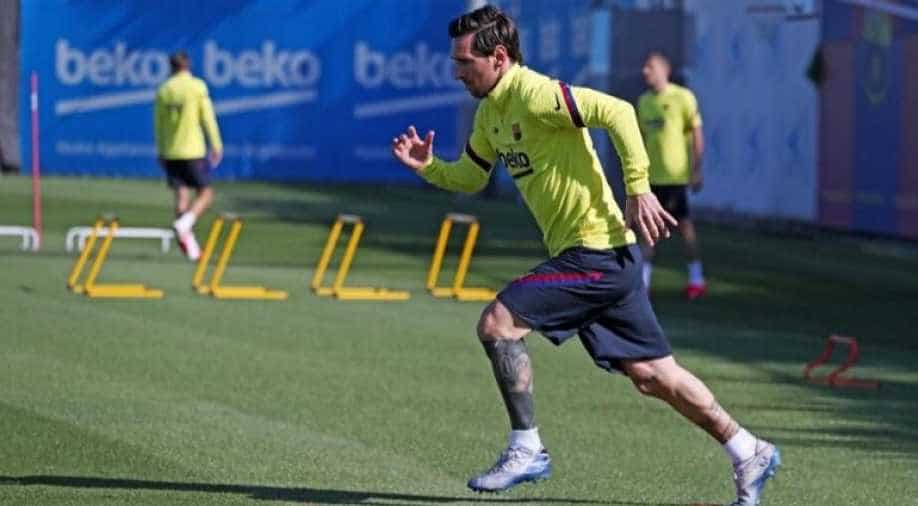 Lionel Messi had resumed training with Barcelona after weeks of coronavirus lockdown in Spain that forced him to stay at home. La Liga is set to resume on June 12.

Barcelona and Argentina skipper Lionel Messi said that he is looking forward to playing in La Liga again, but the playing behind closed doors is "weird".

Lionel Messi had resumed training with Barcelona after weeks of coronavirus lockdown in Spain that forced him to stay at home. La Liga is set to resume on June 12.

"We cannot think about what we are leaving behind this year. It is better to think about the future," said Messi on the website of sports brand Adidas.

"Like going back to day-to-day training, seeing your teammates, playing your first few games. No doubt it will be strange at first, but I am looking forward to competing again!

He said playing behind closed doors with no one to cheer "implies a series of challenges. The preparation at squad level is the same as for any other match, but it is true that individually you have to train and get mentally prepared to play without people because it is very weird."

"It will be like starting over," he said. "Technically it will be the same season, but I think all teams and players will experience it differently."

The six-time Ballon d'Or winner was ready to lead Argentina in this year's Copa America that is hosted by Colombia, but due to the coronavirus pandemic, the competition was postponed in march and now will take place in June and July next year.

"Postponing the Copa America was a huge disappointment, but of course it was reasonable and most logical," Messi said.

"The Copa was going to be a big event for me this year and I was looking forward to playing in it again," he said.

"It was hard when I heard about the postponement, but I understood it perfectly," he said.

(Inputs from an agency)