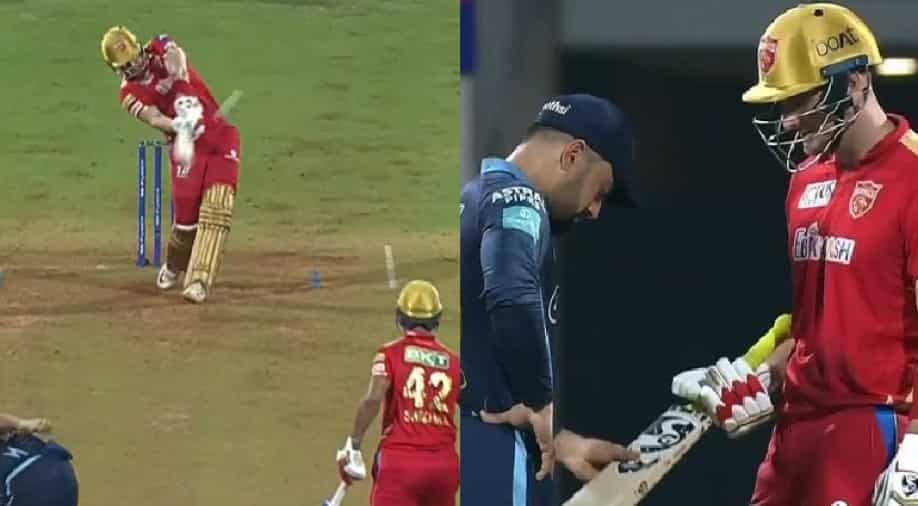 Gujarat Titans star Rashid Khan and Mohammed Shami among others were left in awe after Punjab Kings' batter Liam Livingstone slammed the biggest six of IPL 2022 in the clash between the two sides on Tuesday.

Liam Livingstone stole the show with the bat in his side Punjab Kings (PBKS)' clash against Gujarat Titans (GT) in the ongoing Indian Premier League (IPL) 2022 on Tuesday. Livingstone took GT pacer Mohammed Shami to the cleaners hitting him for three consecutive sixes in the 16th over of PBKS' innings while chasing a target of 144 runs.

It was an incredible display of power-hitting from Livingstone, who smashed the biggest six in IPL 2022 so far against Shami. The Englishman, who was roped in by Punjab Kings for a whopping Rs 11.50 crore (INR 115 million) at the IPL 2022 mega auction earlier this year, proved why he is one of the most dangerous T20 batters in the world at present.

Livingstone was sent early at no.3 against the Titans to wrap up the chase as quickly as possible with PBKS on 97/2 in 12 overs in pursuit of the 144-run target. He wasted little time in settling down and went after Shami in the 16th over. He slammed three consecutive sixes off the first three balls from Shami, including a stunning 117m hit.

The monstrous six from Livingstone left the entire cricket fraternity drooling while many Gujarat Titans players' on the pitch were left in awe. Gujarat Titans spinner Rashid Khan was even spotted checking Livingstone's bat after his stunning six while Shami had a smile on his face as he appreciated the incredible hit from the PBKS star.

Livingstone was in sensational touch and in no mood to spare the Gujarat Titans bowlers as he finished the game in the 16th over itself from Shami. After smashing three sixes off the first three balls, the Englishman slammed two fours off the next three balls to score a whopping 28 runs in the over and take PBKS over the line comfortably.

Punjab Kings chased down the target of 144 runs with as many as four overs to spare, thanks to Shikhar Dhawan's unbeaten 62 off 53 balls and Livingstone's quickfire cameo. The England star scored 30 off just ten balls in the game and remained unbeaten to take PBKS home in the run-chase.