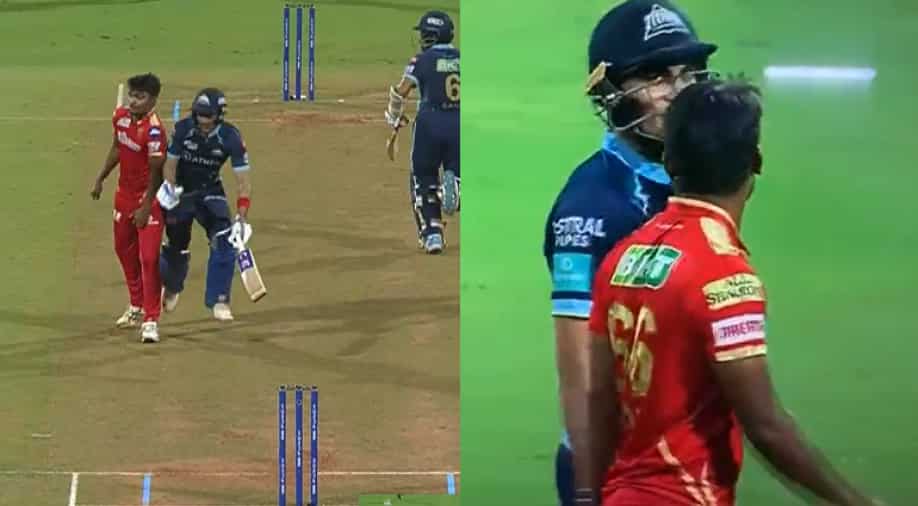 Shubman Gill was involved in a heated exchange with Sandeep Sharma. Photograph:( Twitter )

Gujarat Titans' Shubman Gill was involved in a heated exchange with Sandeep Sharma after getting run out in the clash against Punjab Kings in the ongoing IPL 2022 on Tuesday.

Gujarat Titans' opener Shubman Gill's poor run continued in the Indian Premier League (IPL) 2022 on Tuesday (May 03) as he was once again dismissed cheaply without managing a double-digit score in his side's clash against Punjab Kings (PBKS) on Tuesday.

Gill suffered a terrible run-out after a mix up with Punjab Kings' pacer Sandeep Sharma, who was standing in Gill's path while the GT opener was completing the run. The incident happened on the first delivery of the third over when Gill pushed one towards cover and ran for a quick single.

Gill was involved in a mini collision with Sharma while completing the run. He was caught short on the crease on the non-striker's end after a brilliant throw from Rishi Dhawan, who shattered the stumps with a direct hit. Gill was sent packing cheaply on 9 off just 6 balls.

The Gujarat Titans' opener was visibly upset with Sharma as he went on to have a heated exchange with the Punjab Kings pacer before walking back to the dugout.

After Gill's departure in the third over, young Indian batter Sai Sudarshan came out to bat at number three and went on to steady the ship for Gujarat Titans. Sudarshan remained unbeaten on 65 off 50 balls to help Gujarat Titans post 143/8 in 20 overs.

As the likes of skipper Hardik Pandya (1), David Miller (11) and Rahul Tewatia (11) failed to get going, Sudarshan took control of GT's innings and helped them post a fighting total on the board. Gujarat Titans will be looking to defend the total and continue their winning run in the tournament.