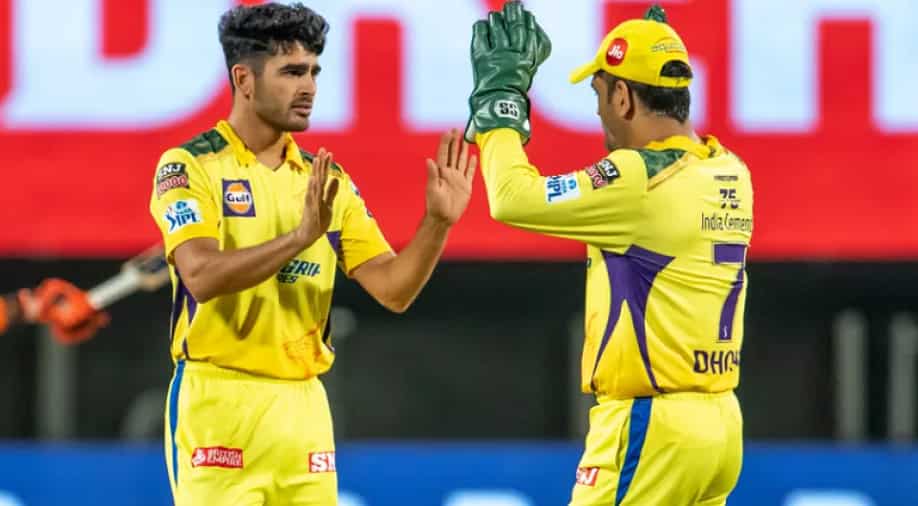 Mukesh Choudhary revealed how MS Dhoni inspired him to take up cricket. | Photo - IPL | Photograph:( Others )

Chennai Super Kings (CSK) pacer Mukesh Choudhary has been a success story for his side in the ongoing Indian Premier League (IPL) 2022. The left-arm pacer had a sluggish start in the league but has grown into confidence with each passing game. He has been a regular feature in CSK's playing XI this season and has stepped up in the absence of Deepak Chahar.

With Chahar out of the season due to an injury, Choudhary has been used extensively by CSK in the Powerplay. He bowled a brilliant spell against Mumbai Indians picking up a three-wicket haul while conceding only 19 runs before scalping a four-wicket haul against Sunrisers Hyderabad in CSK's last outing.

Choudhary recently opened up on his journey from playing cricket in his local neighbourhood to realising his dream of playing in the IPL for CSK. The fast bowler revealed it was current CSK skipper and former India captain MS Dhoni's iconic six in the 2011 ODI World Cup final against Sri Lanka that inspired him to take cricket seriously.

“Whenever I see that winning six, I get goosebumps. The moment Dhoni sir hit that winning six and hugged Yuvraj Singh, I decided I would also play for India someday. I used to play cricket, but I began taking the game more seriously after that historic moment. The 2011 World Cup team inspired me a lot," Choudhary was quoted as saying by the Times of India.

“I spoke about the triumph with Dhoni sir. He has an abundance of knowledge”, he added.

Choudhary has so far played eight matches for CSK this season and has 11 wickets to his name, including a four-wicket haul. The left-arm pacer has done well with the new ball so far this season and will be hoping to improve as the tournament progresses.

Chennai Super Kings have so far managed only three wins in nine matches so far this season and are in desperate need to spark a turnaround to keep their playoffs hopes alive.