Leicester hit back to shock Spurs with help from VAR 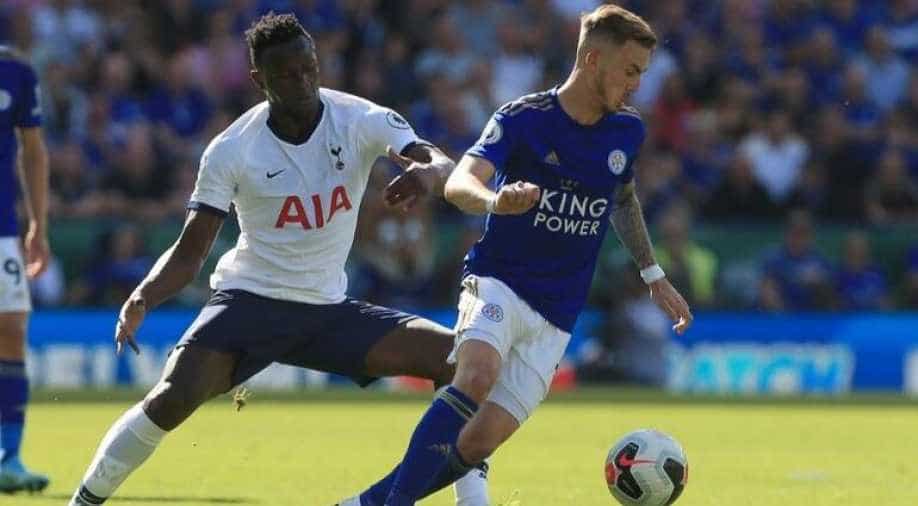 Tottenham's long wait for an away win in the Premier League continued as Leicester came from behind to beat last season's Champions League finalists 2-1 at the King Power on Saturday.

However, the goal was ruled out by the finest of margins for offside after a VAR review and Leicester compounded Spurs' pain by equalising two minutes later through Ricardo Pereira.

James Maddison's fine long-range strike five minutes from time then capped Leicester's comeback as they moved above Manchester City into second in the Premier League, for a few hours at least.

By contrast, Spurs have now won just two of their first seven games of the season in all competitions and have still not won away from home in the Premier League since January.

Leicester are aiming to break the glass ceiling of the Premier League top six for the first time since their sensational title triumph in 2016.

And Brendan Rodgers's men claimed their first big-six scalp of the season after drawing away to Chelsea and running Manchester United close at Old Trafford last weekend.

The Foxes started brightly as Maddison curled just wide and then forced Spurs' stand-in goalkeeper Paulo Gazzaniga into a smart save at his near post.

The hosts were also first to have the ball in the net when Gazzaniga -- deputising for the injured Hugo Lloris -- spilled Youri Tielemans's shot and Wilfred Ndidi bundled home the rebound.

But replays showed Ayoze Perez was offside as he reached the loose ball off Gazzaniga first and the goal was ruled out after a VAR review.

Kane makes most of reprieve

Handed that reprieve, Tottenham went in front in unusual fashion on 29 minutes when Son Heung min's backheel found Kane, who stumbled and hit the floor as he bore down on goal.

However, the England captain still managed to flick the ball high beyond Kasper Schmeichel from the ground for his 14th goal in 13 games against Leicester.

Kane should have done better with a far better chance moments later when he dragged a shot wide.

At the other end, Gazzaniga was being kept busy as he denied Perez and Jamie Vardy either side of half-time, while Harvey Barnes also headed wastefully wide for the hosts.

But the momentum of the match truly turned Leicester's way on another VAR call 23 minutes from time.

Kane teed up Aurier to fire home from the edge of the area, but the goal was ruled out for Son being barely a millimetre offside in the build-up.

Leicester built on that huge lift and went straight down the other end to level when Vardy's low cross was turned home at the far post by Pereira.

Spurs had chances to retake the lead as Aurier fired across goal and wide, while Kane's powerful effort was too close to Schmeichel.

And they were hit with the sucker punch when Maddison pounced on a loose ball and drilled a shot into the bottom corner from 25 yards.