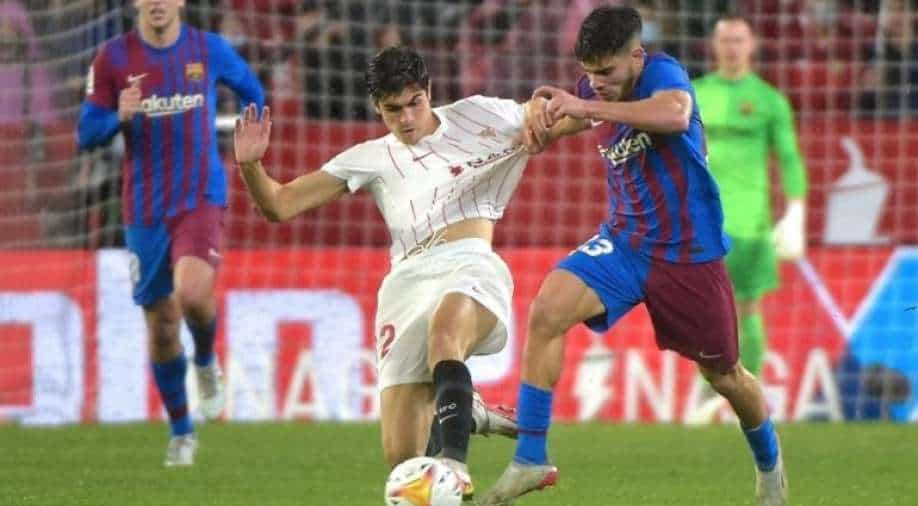 Barcelona are seventh in standings with 28 points from 18 games, 15 points behind leaders Real Madrid.

Second-placed Sevilla were held to a 1-1 draw by Barcelona on Tuesday (December 21), allowing Real Madrid to take a five-point lead in La Liga.

Ronald Araujo scored shortly before halftime to earn Barcelona a draw against 10-man Sevilla, a result that will help La Liga leaders Real Madrid. Second-placed Sevilla are five points behind the leaders, with Carlo Ancelotti's men due to face Atletico Bilbao on Wednesday. Xavi's Barcelona missed out on fourth place and dropped to seventh, 15 points behind Real Madrid.

Papu Gomez put Sevilla ahead after half an hour after connecting with an Ivan Rakitic cross from a corner, but Uruguayan defender Araujo equalised just before half time in Seville.

After Jules Kounde was sent off in the 64th minute for throwing the ball at Jordi Alba, the hosts played the last 30 minutes with one man down. Despite having chances, Barcelona failed to capitalise, with Gavi putting a header wide outside and Ousmane Dembele hitting the post.

Barcelona controlled the first half, had better ball possession, and had at least two scoring chances in the opening 30 minutes. But Sevilla made the most of their one chance in the first half, with Gomez smashing home a thunderous shot.

After Kounde was sent off for a petulant display following a fight with Jordi Alba on the touchline, Sevilla had to go to damage-control mode. For the unversed, Kounde threw the ball at Alba's face after being shoved by the Barcelona defender.

Barcelona manager Xavi Hernandez told reporters, "I honestly think that today we lost two points. We played better and deserved to win. I feel that is evident in our improvement."

"We were unlucky. They score in a set piece play but we had many more opportunities. The result, a draw away against a great team like Sevilla, is not bad. But it is a point that is not enough for us as we are trying to move up in contention. We let this win slip away from our hands," he added.