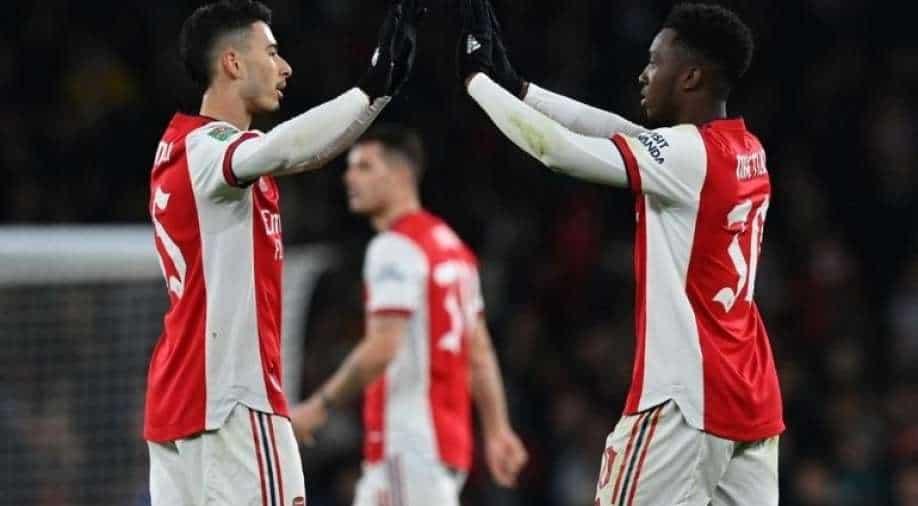 Eddie Nketiah scored a hat-trick as a much-changed Arsenal marched into the League Cup semi-finals by beating Sunderland 5-1 on Tuesday.

The 22-year-old striker is out of contract at the end of the season and gave potential suitors in the January transfer window a reminder of his predatory prowess in front of goal.

Nicolas Pepe and Charlie Patino on his debut were also on target for the Gunners as the match went ahead at the Emirates without any restrictions on crowd numbers despite London mayor Sadiq Khan declaring a "major incident" in the English capital due to spiralling coronavirus infection numbers.

Arsenal were one of just eight sides in Premier League action last weekend as the wave of Covid cases caused by the new Omicron variant decimated the English football calendar.

Mikel Arteta made nine changes from the side that thrashed Leeds 4-1, but Arsenal were never in danger of suffering an upset.

Nketiah opened the scoring on 17 minutes as he bundled the ball home from close range after Rob Holding's header was parried by Sunderland goalkeeper Lee Burge.

Pepe remains Arsenal's record signing, but has been dropped down the pecking order this season due to the form of youngsters Bukayo Saka, Emile Smith Rowe and Gabriel Martinelli.

The Ivorian took his rare chance to shine as he exchanged passes with Cedric Soares before seeing his strike deflected past the helpless Burge.

Nathan Broadhead pulled a goal back for League One Sunderland before half-time.

But Nketiah quickly restored Arsenal's two-goal advantage five minutes into the second half, flicking in a Nuno Tavares cross at the near post.

Nketiah completed his hat-trick in impressive fashion soon afterwards as he backheeled Pepe's cross beyond Burge.

Arteta then handed the highly-rated Patino his debut 10 minutes from time.

And the 18-year-old rounded off the scoring when he slotted home another Pepe pass.