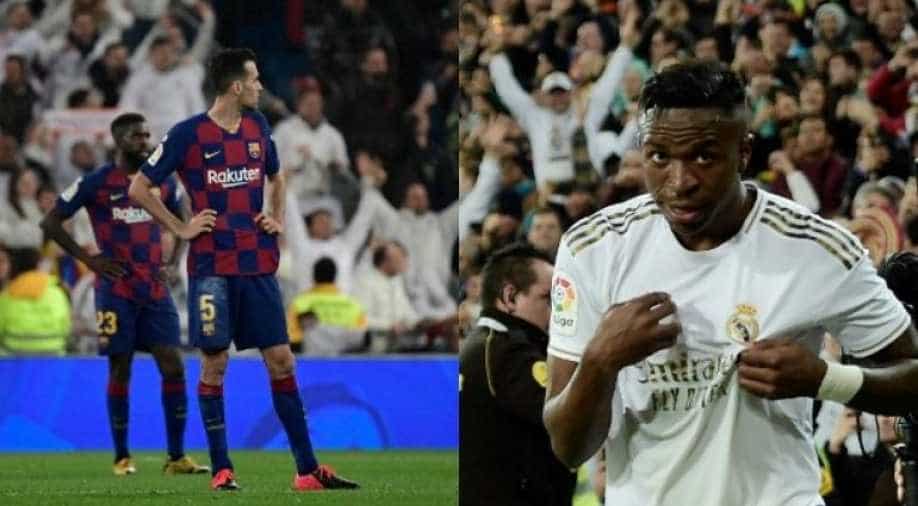 El Clasico, the most-watched club game in world football, is back, with FC Barcelona set to host Real Madrid at the Camp Nou on Saturday at 7:30 pm. An unpredictable, live-action drama shown all over the world by over 100 LaLiga partners and now into its 90th season – a feat unprecedented in the entertainment world.

El Clasico, the most-watched club game in world football, is back, with FC Barcelona set to host Real Madrid at the Camp Nou on Saturday at 7:30 pm. An unpredictable, live-action drama shown all over the world by over 100 LaLiga partners and now into its 90th season – a feat unprecedented in the entertainment world. The LaLiga El Clasico saga has gifted us a stream of incredible storylines over the years, including the greatness of legends such as Johan Cruyff, Alfredo Di Stefano and more recently Ronaldinho, Sergio Ramos and Lionel Messi, unforgettable moments of both showmanship and sportsmanship, and technological and broadcast landmarks.

The first El Clasico of the COVID-19 era

Enjoying El Clasico, or LaLiga football in general, seemed unlikely just months ago, with the world in lockdown in the midst of the global COVID-19 pandemic. But LaLiga’s comprehensive #BackToWin strategy – which laid out an extensive multi-phase plan to restart the season with regular COVID-19 testing covering personal behaviour away from training facilities, in homes and daily lives – ensured not only that the 2019/20 LaLiga Santander season could be completed in the space of just 39 days without a single positive case but also that the 2020/21 season started on time in early September.

Over 100 ElClasico-themed actions organised all over the world

Though governmental health restrictions mean fans won’t be in the Camp Nou stands for this first-ever El Clasico behind closed doors, LaLiga has ensured that fans around the world will still be able to come together for the greatest show in club football.

Over 100 ElClasico-themed actions are being organised across the world, among them a public viewing for up to 700 fans in Shanghai, watch parties in Vietnam, Dubai, South Africa, Nigeria, Kenya and other locations across the African continent. Over in Latin America, meanwhile, fans will be able to enjoy the action from the comfort of their own cars in a series of drive-in cinema locations across Mexico, Colombia, Ecuador and Argentina. LaLiga will also celebrate the ‘premiere’ of its flagship show by lining red carpets at well-known landmarks in the United States, United Kingdom, India, Australia, Senegal, Colombia and Tajikistan to remind fans that El Clasico offers entertainment like no other.

An unrivalled broadcast and digital experience

No matter their location in the world, a potential audience of 650 million fans will be able to watch El Clasico like never before. New match broadcast graphics and statistics powered by cutting-edge Artificial Intelligence and Augmented Reality now provide fans with a more complete viewing experience than ever before, and pioneering virtualised crowd and audio technology complements the on-field action while fans are yet to return to LaLiga stadiums. With 14 LaLiga Santander stadiums kitted out with aerial cameras and aerial drones now capturing new and exclusive angles, the action never looked so good on a screen. El Clasico will be shown live in India on Facebook for free.

LaLiga’s 22 international social media channels publishing exciting content in the week leading up the match as well live streaming the all-important pre-match buildup in the two hours before kick-off to over 120 million followers around the world. A special online Fan Zone will be created giving fans a chance to win replica shirts of their favourite clubs, while a brand new mobile game, Score Words LaLiga, will be launched in line with the match offering fun challenges and online gameplay. In short, fans’ second screens will also be as busy and engaging as ever.

The stars of El Clasico

As always, the greatest stars in world football will be on show for the millions of viewers around the globe. Superstars such as all-time ElClasico top scorer and six-time Ballon d’Or winner Messi and Ramos, the man with the most ElClasico appearances in history, are back this season, as are established international stars like Luka Modric, Gerard Pique, Karim Benzema, Frenkie de Jong and Thibaut Courtois.

A key talking point of ElClasico Season 90 will also be the plethora of exciting new faces on show. Dutch coach and former Barça legend Ronald Koeman returned to the Camp Nou this summer charged with leading an ambitious wholescale rebuilding project and has made some of the most talked-about moves in this summer’s European transfer market, welcoming the likes of Sergiño Dest – the first American to ever represent Barcelona in LaLiga – Trincao and Miralem Pjanic to the Catalan capital. On the other side of the El Clasico divide, Real Madrid coach Zinedine Zidane – like Koeman, one of the most iconic players in his club’s history and in the ElClasico story – leads a mostly unchanged squad to that which steamrolled its way to the LaLiga Santander title after the break forced by COVID-19 last season.

Add in the fact that this season’s ElClasico boasts some of the most exciting young talents in world football under the age of 21, among them teenage prodigy Ansu Fati – Barcelona’s youngest-ever goalscorer – the aforementioned Dest, and at Real Madrid Norwegian wonderkid Martin Odegaard and Vinicius Jr, and this ElClasico is shaping up to be one of the most thrilling and intriguing clashes between the two sides in recent memory.

Everything is in place for the return of ElClasico, the best footballers in the world and the best fan experience possible.