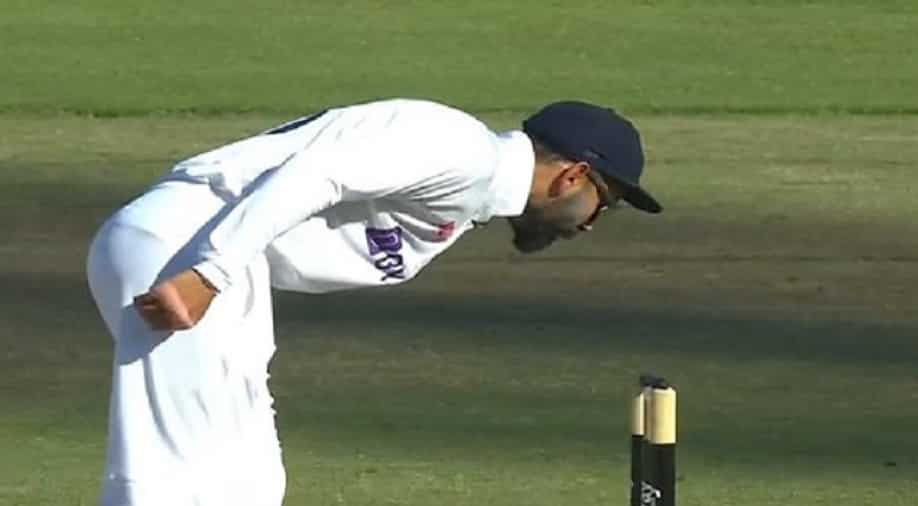 Virat Kohli was seen venting out his frustration on the stump mic during the 3rd Test. Photograph:( Twitter )

Many former cricketers and experts of the game have slammed Team India for their approach on the entire DRS controversy. After the DRS incident, India lost the plot on the field during the fag end of Day 3 by leaking runs at will as SA ended the day's play at 101-2, chasing 212.

Day 3 of the third and final Test between India and South Africa, at Newlands, Cape Town, was another topsy-turvy battle between both sides in the series finale. As India started the day at 57-2, with an overall lead of 70 runs, Rishabh Pant's unbeaten 100 enabled India to setup a tricky 212-run target for the Dean Elgar-led Proteas.

While SA ended the day's play at 101 for 2, with both the openers Aiden Markram and Captain Elgar back in the pavillion, there was a huge controversy which erupted when Elgar survived a very close LBW call. The Proteas captain was given out by the on-field umpire, Marais Erasmus, after being trapped plumb in front by R Ashwin. However, Elgar took the decision upstairs where replays showed that the ball had hit the left-hander below the knee, however, the hawk-eye displayed that the ball was going above the stumps. Thus, Elgar breathed a sigh of relief by getting a reprieve at that time (he eventually fell for 30 before close of play).

Thus, this led to a huge controversy as Indian players -- such as Captain Virat Kohli, KL Rahul and Ashwin -- didn't mince their words and showed their frustration in the middle.

"Focus on your team as well and not just the opposition,” Kohli said as he walked up to the stump mic after Ashwin and Rahul also expressed their displeasure over the ball-tracking system.

The 33-year-old Kohli went too far ahead and even mocked the broadcaster 'SuperSport', claiming that they were doing what they could to help the home side.

Thus, former SA batter Daryll Cullinan came down heavily on Captain Kohli. He feels the Indian star batter has for too long got away with his overaggressive behaviour on-field.

“This is the typical Virat untouchable! He behaves the way he wants to behave. The rest of the cricket world just bows down to Virat. The powerhouse is India. I hate to say this but it’s been going on for years. It’s just the big suck up towards India and anybody who plays for India. They are untouchable, so everyone will laugh it off,” the former South African told ESPNCricinfo.

“I love Virat Kohli, I love his cricket, I love the way he plays. But there has to be a line drawn somewhere to say ‘hang on, you must be severely punished’. If anything, it was a mistake. I just cannot believe that they could think along those sort of lines. For too long Virat has got away with behavior which is unacceptable on a cricket field. But he’s Kohli and I don’t like it, quite frankly," he added.

“There was an insinuation from the Indian camp that the host broadcasters were up to some mischief to make sure they were putting their own team at an advantage. That is a serious kind of insinuation. I have a problem with that,” Manjrekar said.

“Virat Kohli is going through one of the most difficult phases of his career. He lost his ODI captaincy, there has been some controversy over that. This is the first time that I am seeing self-doubts have started creeping in. We saw it during the IPL as well. Never thought this guy would be under-confident,” he added.

Many former cricketers and experts of the game have slammed Team India for their approach on the entire DRS controversy. After the DRS incident, India lost the plot on the field during the fag end of Day 3 by leaking runs at will as SA ended the day's play at 101-2, chasing 212.