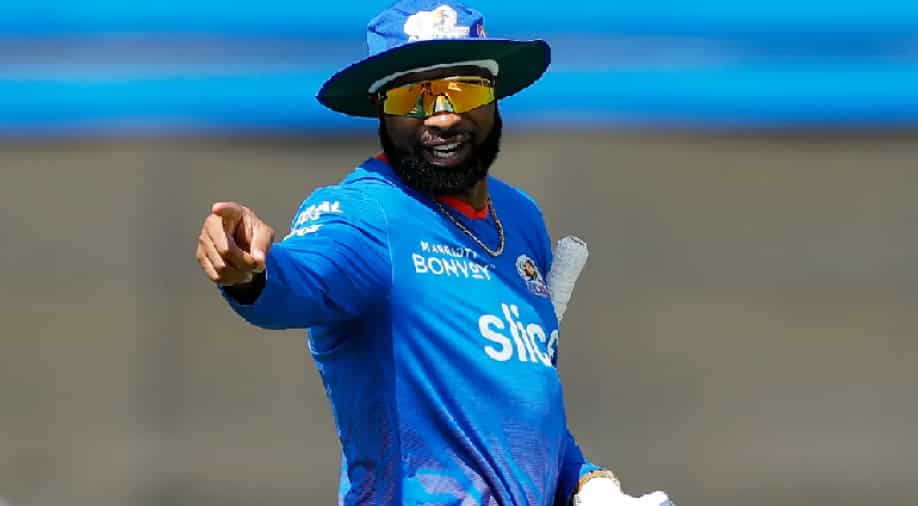 Kieron Pollard has struggled for Mumbai Indians in IPL 2022. | Photo - IPL | Photograph:( Others )

Kieron Pollard has struggled for Mumbai Indians (MI) so far in the ongoing Indian Premier League (IPL) 2022. Former India cricketer Aakash Chopra has made a bold prediction about his future in the remainder of the season.

Mumbai Indians' (MI) struggles have been well documented in the ongoing Indian Premier League (IPL) 2022 season. The five-time champions have managed just two wins in ten matches so far this season and are currently lying at the bottom of the table with their playoffs hopes already quashed.

While the form of their openers and their struggling bowling attack have been among the biggest concerns for MI this season, Rohit Sharma & Co. have also suffered due to the woeful form of star all-rounder Kieron Pollard. Pollard has been abysmal with both the bat and the ball failing to make an impact for his team.

The West Indies all-rounder, who has been one of MI's longest servants and has only played for the five-time champions in his IPL career so far, has not been among the runs and has bowled occasionally. In MI's last game against Gujarat Titans on Friday, Pollard managed only 4 runs off 14 balls after coming out to bat at number 5.

If not for Tim David's quickfire 44 off 21 balls, Pollard's inability to rotate the strike could have cost MI the game. David's cameo helped MI post 177 runs on the board in 20 overs and win the game by 5 runs to bag their second win of the season. Amid Pollard's poor run, former India cricketer Aakash Chopra has made a bold claim on the all-rounder's future in the remainder of the season.

Chopra believes Pollard's IPL 2022 campaign is now over and that the West Indies all-rounder will not play again for Mumbai Indians this season. Chopra said Pollard can make way for young Dewald Brevis, who had impressed for MI in his first few games this season.

"Tilak Varma got run out but before that Kieron Pollard got out. That's an interesting one, I feel Kieron Pollard will not play any further this year, that's it, they won't play him anymore because Dewald Brevis is sitting outside and Tim David is doing well," Chopra said in a video on his YouTube channel.

"Don't know why they didn't play a punt on Tim David earlier. They had kept this six-hitting machine sitting outside for a long time. Now they have remembered that they should play him and he has not disappointed them even once since they have played him, match-winning knocks coming at the end," he added.

Also Read: If I was a selector, Umran Malik would partner Jasprit Bumrah for India at T20 WC 2022: Harbhajan Singh

In ten matches so far in IPL 2022, Pollard has only managed 129 runs at an abysmal average of 14.33 and a strike rate of just 109.32. With Mumbai Indians already out of the race for the playoffs, it remains to be seen if the five-time chamions will drop the West Indies stalwart to give a chance to others in the squad.