'Karthik was at the other end, not me': Ashish Nehra jokes about Hardik denying single in 1st T20I vs SA 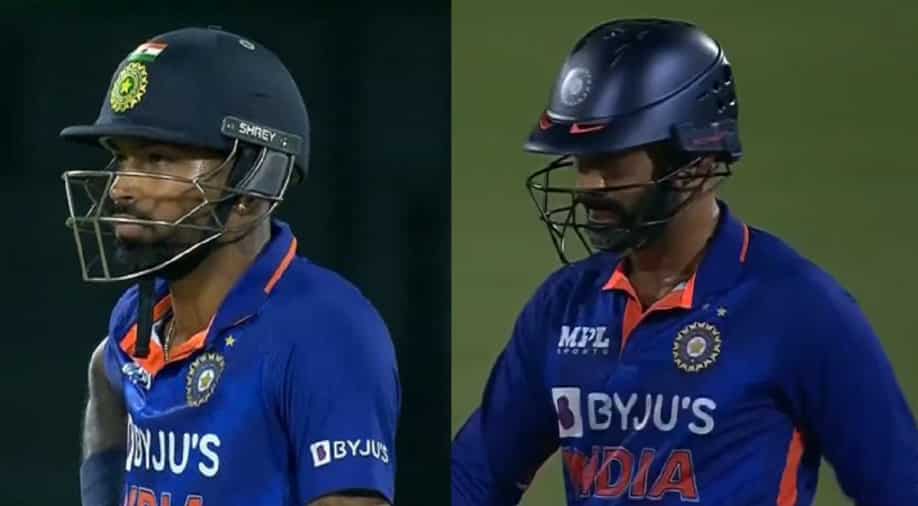 Hardik Pandya had denied a single to Dinesh Karthik in 1st T20I vs SA. Photograph:( Twitter )

Former India pacer and Gujarat Titans head coach Ashish Nehra came up with a funny response when asked about Hardik Pandya denying a single to Dinesh Karthik in the final over of India's innings in the first T20I against South Africa on Thursday.

Hardik Pandya denying a single to Dinesh Karthik on the penultimate ball of the final over of India's innings in the first T20I against South Africa became one of the major talking points of the game India lost the game by seven wickets at the Arun Jaitely Stadium in New Delhi on Thursday despite posting a strong total of 212 runs on the board as the visitors took a 1-0 lead in the five-match series.

The incident happened in the 20th over of India's innings when Hardik was out in the middle with Karthik. On the 5th delivery from South African pacer Anrich Nortje, Hardik played a shot towards deep mid-wicket and had a chance to run an easy single. However, he decided to keep the strike and not take the run despite a proper batter in Karthik on the other end.

The incident soon became a talking point on social media with many criticising Hardik for his actions. Former India pacer Ashish Nehra was asked for his views on the incident post the match. Nehra is the head coach of Hardik's IPL side Gujarat Titans, who won the IPL 2022 title in their debut season this year.

Nehra came with a funny response and said it was Karthik on the non-striker's end and not him so he won't be able to answer why Hardik didn't opt for the single. "He should have taken a single in that final over. Dinesh Karthik was at the other end, it wasn't me," said Nehra during a discussion on Cricbuzz.

Both Hardik and Karthik made their comeback to the Indian squad after a long time. While Karthik returned to the team after a gap of three years having last played for the Men in Blue during the ODI World Cup in 2019, Hardik spent a few months on the sidelines following the conclusion of the T20 World Cup last year to recover from his back injury fully.

Both Hardik and Karthik enjoyed brilliant campaigns for their respective teams in IPL 2022 to impress the selectors and make a comeback for the Indian team. However, India lost the opening game by seven wickets against South Africa despite posting 211 runs on the board.

David Miller and Rassie van der Dussen were the heroes for South Africa with the willow as the duo slammed unbeaten half-centuries apiece to take the visitors home comfortably in the 212-run chase with five balls to spare.