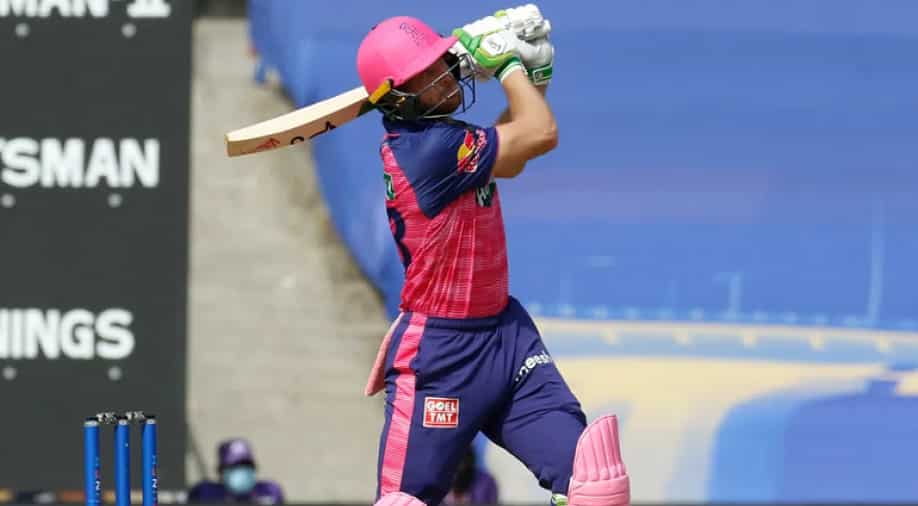 Jos Buttler slammed 26 runs off an over from Basil Thampi. | Photo - IPL | Photograph:( Others )

Rajasthan Royals opener Jos Buttler looked in brilliant touch as he slammed the first century of IPL 2022 in his side's clash against Mumba Indians on Saturday. Buttler scored 26 runs off an over from Basil Thampi en route to his hundred.

Rajasthan Royals (RR) opener Jos Buttler slammed the first century of the ongoing Indian Premier League (IPL) 2022 as he played a brilliant knock of 100 runs off 68 balls against Mumbai Indians (MI) on Saturday (April 02). Buttler looked in fine form as he took the MI bowlers to the cleaners during his stunning knock.

Buttler made a steady start before going after the MI bowlers. He went all out against Indian pacer Basil Thampi in the fourth over of the RR innings and slammed 26 runs off it. Thampi started the over with a dot ball before being smacked for a four on the next delivery.

Buttler then slammed two back-to-back sixes against the right-arm fast bowler before finishing the over with a four and a six. The RR opener looked in dangerous touch as he slammed a total of three sixes and two fours in Thampi's over to get 26 off it. One of the sixes went a whopping 101m leaving the fans in awe.

Buttler had completed his fifty off just 32 balls before racing away to his hundred off 67 deliveries. His 100-run knock was laced with 11 fours and 5 sixes as the RR opener became the second England player after all-rounder Ben Stokes to score two hundreds in the IPL.

Buttler had scored his first IPL century against Sunrises Hyderabad in IPL 2021 last year. With his ton on Saturday, Buttler moved to the top of the list of highest run-getters in IPL 2022 for a while before he was overtaken by Mumbai Indians' wicket-keeper batter Ishan Kishan, who slammed his second fifty in a row this season.

Riding on Buttler's century and Shimron Hetmyer's sensational cameo of 14-ball 35, RR went on to post a huge total of 193 runs on the board in 20 overs. While RR will be hoping to maintain their winning run against MI, Rohit Sharma & Co. are searching for their first win of the season.