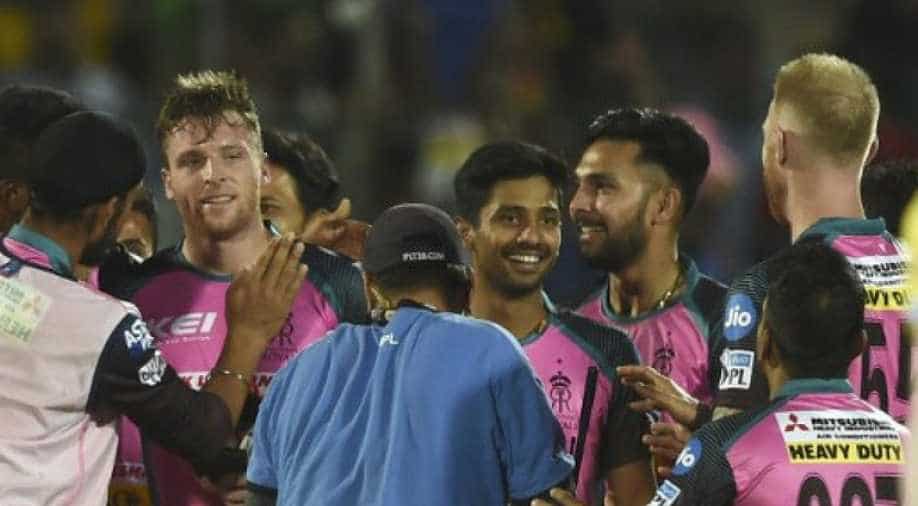 Jos Buttler's unbeaten 95-run knock helped Rajasthan to win a do-or-die clash against in-form Chennai team. Rajasthan's victory has made the fight&nbspfor the fourth spot more difficult, even the third spot is not going to be easy.

Earlier, MS Dhoni-led Chennai had set a 177-run target which Rajasthan chased down, all thanks to star batsman Jos Buttler. After defeating Chennai by six wickets, Ajinkya Rahane's hope of surviving in the ongoing edition of Indian Premier League&nbsphas been rejuvenated.

Apart from Jos Buttler, none of the other players made the&nbspnecessary contributions. On one side, Buttler was playing a responsible innings and on the other, batsmen kept losing their wickets. For his splendid performance, Buttler was awarded Man of the Match award.

Sawai Mansingh Stadium of Jaipur was coloured pink as the home team was had entered the fields with another very important cause, which is cancer awareness.

The franchise today revealed a unique jersey ahead of the clash to boost statewide cancer out campaign launched by Rajasthan.

Rajasthan have donned a special jersey which has been created with a blend of three colors- pink, teal and burgundy. The three colours symbolise the most profound and common types of cancer- pink for breast cancer, burgundy for oral cancer and teal for cervical cancer.

Earlier, Chennai won the toss and opted to bat and playing first, the opener Shane Watson scored 39 runs and gave the required start for the team but another opener Ambati Rayudu, who is currently is in a massive form could not perform today and lost his wicket to Rajasthan's pacer Jofra Archer after scoring just 12 runs.

Suresh Raina scored 52 runs and helped the team in pushing the run rate. Playing at 148.57 strike rate, he hit few beautiful shots and his innings included six 4s and one 6s.

MS Dhoni and Sam Billings helped in continuing the momentum and scored 33 and 27 runs respectively for the team to put up a decent target.

Rajasthan struggled in taking wickets and also the pitch was not supporting the pacers.