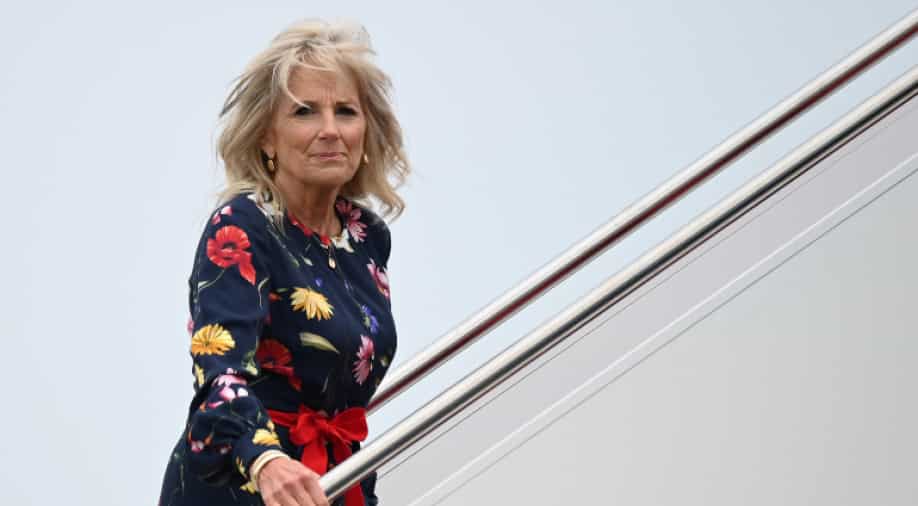 Jill Biden sends a message of support to a key Asian ally despite concerns about the COVID-19 pandemic.

US First Lady Jill Biden is leading her country's diplomatic delegation to the Tokyo 2020 Olympics, sending a message of support to a key Asian ally despite concerns about the COVID-19 pandemic.

Biden, wearing a red dress and face mask, arrived at Yokota Air Base in Japan on Thursday afternoon and was greeted by Japan's foreign minister and by US and Japanese base officials, at the start of a lengthy visit to Japan.

Olympics and Japanese officials have forged ahead with the sports spectacle despite public opposition in the country to hosting huge numbers of athletes, staff and media - more than 11,000 in the athletes' village alone - dozens of whom have already tested positive for COVID-19.

But US President Joe Biden sees the pandemic-postponed Games as a critical moment for showing support for a longtime ally and trading partner who he hopes will support US efforts to check China's rise, aides said.

Later on Thursday, Jill Biden will have dinner with Japanese Prime Minister Yoshihide Suga and his wife Mariko at Akasaka Palace, according to the White House.

On the way, Biden stopped in Alaska to greet military families and encourage vaccination.

Suga is meeting with only about 15 world leaders on the sidelines of the Olympics, compared with up to 120 previously, a spokesperson said. President Biden hosted Suga at the White House in April.

The Olympics trip is the first lady's first solo adventure abroad and will include three days on the ground in Japan.

She plans to attend the opening ceremony on Friday, as well as meet with Team USA athletes, US foreign service officers and Japanese Emperor Naruhito.