IPL Explainer: Decoding the whys and why nots of auction Day 1 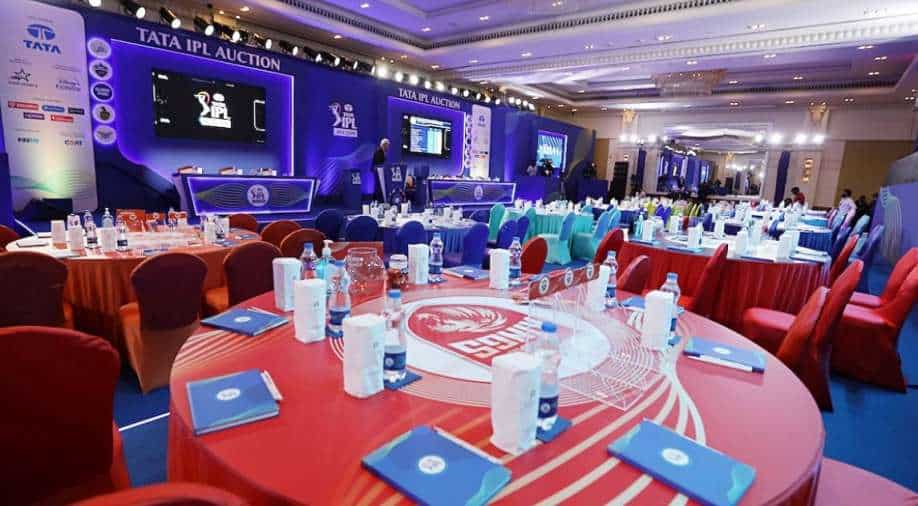 A view of the team tables prior to the Indian Premier League (IPL) 2022 Auction. Photograph:( ANI )

Teams like KKR need to buy at least nine more players (for a minimum squad of 18) and only have 12 crores to spend. So these guys won't be attracting great bids

The 10 IPL franchises have so far spent above Rs 388 crore collectively to buy 74 players out of which 20 are overseas recruits.

There were 20 players who got more than USD 1 million (Rs 7.53 crore as per Saturday's exchange rates).

Q. Why did Ishan Kishan go for Rs 15.25 crore?
A: A current India player and also a wicket-keeper. Can win matches singlehandedly and, at 24, has age on his side. A part of MI's batting core. With 48 crore available, they could have gone for only one big India player. With matches at Wankhede and short boundaries, Kishan is the man to watch out for.

Q. Why did CSK pay Rs 14 crore for Deepak Chahar?
A: CSK had to go the distance for one among Deepak Chahar and Shardul Thakur, both blessed with multiple skill sets. Chahar with his impeccable powerplay wicket-taking ability and being a part of CSK's set template of experienced players was a no-brainer. Once they took Chahar, they couldn't have possibly gone for Shardul. However, CSK still look short on the express pace department but MS Dhoni will manage it.

Q: Why did Nicholas Pooran and Jonny Bairstow get big deals and Matthew Wade went unsold?
A: Most among the 10 teams needed wicket-keepers. Pooran had a horrendous last IPL but is still considered among one of the biggest T20 hitters plus a safe gloveman, and at times, a brilliant outfielder. It also had a lot to do with the kind of purse that SRH and Punjab Kings had, which certainly inflated his bid.

As far as Matthew Wade who played a blinder in the T20 World Cup semi-final against Pakistan, he isn't the best player of spin bowling on sluggish surfaces, and hence, Bairstow, who has shown his IPL wares, got a deal.

Q. Why so many foreign fast bowlers with big fat deals?
A: Most of the teams during retention had shored up their batting, and hence, always had to depend on an auction for tearaway quick bowlers. So a Lockie Ferguson and Prasidh Krishna fetched more than Trent Boult at the auction.

It also had a lot to do with Boult coming in a marquee set at the start and the likes of Lockie, Josh Hazlewood coming later in the fast bowlers' set. Kagiso Rabada also went for more than a million dollars as he would have in the first place.

Avesh Khan and Harshal Patel were rewarded for their great show last year and they have been regularly playing domestic cricket. Kartik Tyagi, Shivam Mavi all earned their stripes for raw pace despite not even remotely being in India contention as of now.

Q: Why did KKR spend 12.25 crore on Shreyas Iyer?
A: KKR were looking at two things: a solid top-order, preferably No. 3 or 4 batter and also a proven captaincy material. With must of the top Indian batters not available, Iyer would have cost a bomb and he did indeed.

Q: Which team was most impressive in its choice of players?
A: Delhi Capitals, despite losing a lot of their core players, did a fine job by getting David Warner for less than Rs 7 crore. A Warner-Prithvi Shaw opening combination looks the most destructive. Getting a Mitchell Marsh for less than 7 crore was also a bargain and so was Sarafaraz Khan at a base price of Rs 20 lakh and Kuldeep Yadav for Rs 2 crore.

Q. Which franchise looked the least impressive with their buys?
A: While Lucknow Supergiants were really impressive in their maiden season (although they had come in as Pune earlier), Gujarat Lions' picks defied logic. They haven't yet picked a wicketkeeper and even KS Bharath is sold out. Giving 9 crore to Rahul Tewatia, a one-match wonder of Sharjah, was baffling. He isn't a consistent performer.

Q: What happens to Cheteshwar Pujara, Ajinkya Rahane and Ishant Sharma?
A: Pujara and Rahane are slotted at Nos 103 and 104, respectively, while Ishant is at 124 in the list. They will all come on Sunday but they are low priority as per the franchise's demand for players. Rahane might be taken by CSK for his experience.

Q: What happens to IPL journeymen like Siddarth Kaul and Mandeep Singh?
A: On Sunday, a lot of players will go for a low bidding price as most franchises have exhausted their purse to buy first-team players. Teams like KKR need to buy at least nine more players (for a minimum squad of 18) and only have 12 crores to spend. So these guys won't be attracting great bids.