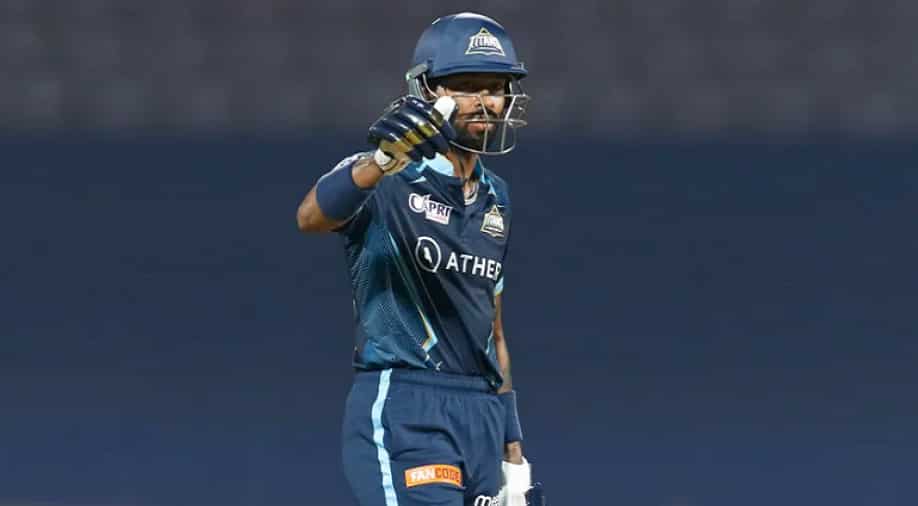 Hardik Pandya missed his side GT's clash against CSK in IPL 2022 on Sunday. | Photo - IPL | Photograph:( Others )

Hardik Pandya is not leading Gujarat Titans in their ongoing clash against Chennai Super Kings in IPL 2022. Rashid Khan is captaining the side in his absence.

In a huge blow to Gujarat Titans (GT) ahead of their clash against Chennai Super Kings (CSK) in the ongoing Indian Premier League (IPL) 2022, skipper Hardik Pandya was ruled out due to a groin issue. The star all-rounder has been in terrific form for his new side DC with the bat and the ball and has had a magnificent start to his captaincy stint.

Afghanistan spinner Rashid Khan is leading Gujarat Titans in their ongoing encounter against CSK in Hardik's absence. The ace spinner revealed Hardik had issues in his groin area and the franchise didn't want to take a chance with his fitness as the all-rounder remains a vital cog in their wheel.

Rashid expressed confidence that it's a minor issue and Hardik will hopefully be back in the next game for Gujarat Titans. "Bit of stiffness in the groin area for Hardik, so as a team we didn't want to take a chance. He will rest and hopefully be back for the next game," said the spinner at the toss after opting to bowl against CSK.

Hardik was roped in by Gujarat Titans as their skipper ahead of the new season after being released by Mumbai Indians. GT paid a huge sum of Rs 15 crore (INR 150 million) to secure the services of the star all-rounder and he has repaid the faith shown by the team management with brilliant performances.

In five games so far this season, Hardik has notched up 228 runs and picked up four wickets for his side while leading them to four wins in five matches. Gujarat Titans have faced their only defeat against Sunrisers Hyderabad this season and are currently sitting at the top spot on the points table with eight points.

Gujarat Titans had kicked off their campaign with a win against fellow debutants Lucknow Super Giants in their first game before bagging back-to-back wins against Delhi Capitals and Punjab Kings in their next two games. GT slipped to a defeat against SRH in their 4th game of the season before bouncing back to beat Rajasthan Royals in their last outing.