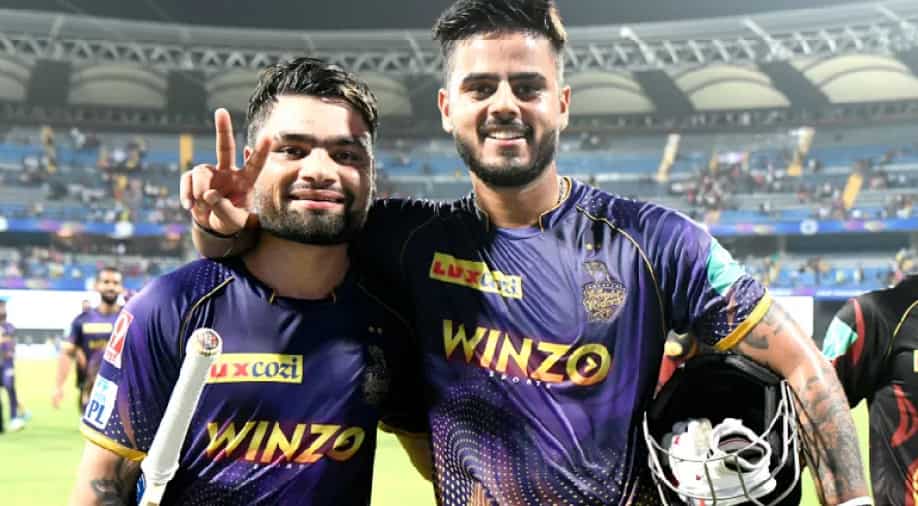 Kolkata Knight Riders (KKR) defeated Rajasthan Royals (RR) by 7 wickets at the Wankhede Stadium on Monday to bring an end to their five-match losing streak in IPL 2022.

Kolkata Knight Riders defeated in-form Rajasthan Royals by seven wickets to snap their five-match losing streak in the Indian Premier League here on Monday. KKR first restricted RR to 152 for five after opting to bowl and then chased down the target with five balls to spare to return to winning ways and heave a sigh of relief.

Nitish Rana (48 not out) anchored the chase, while Rinku Singh played a 23-ball unbeaten 42-run cameo to help KKR overwhelm the target with consummate ease. Aaron Finch's poor run continued as he was cleaned up by Kuldeep Sen early on as KKR made a sedate start to their chase.

KKR batters found the going tough on a slow-paced Wankhede pitch, where shot-making wasn't easy at all.
Baba Indrajith (15) was bounced out by Prasidh Krishna soon but captain Shreyas Iyer (34 off 32) and Nitish Rana batted sensibly to help KKR reach fifty in nine overs.

It was Rana who finally managed to free his arms in the 11th over, and used the sweep and reverse sweep to great effect to hit R Ashwin for a 4-6-4 to pick up 16 runs. Iyer then clobbered Yuzvendra Chahal over wide long-on boundary to bring up the half-century stand for the third wicket with Rana.

Just when it seemed Iyer was breaking loose, he edged a Trent Boult delivery to Samson behind the stumps in the next over. Iyer struck three boundaries and one six during his knock. New man Singh marked his arrival at the crease with a boundary of the first ball.

Needing 46 off 30 balls, Singh played the shot of the day, a paddle scoop to a 141 kmph Sen delivery on his legs high and mighty over the fine leg fence. Singh meant business as he found the fence at crucial junctures to first bring down the equation to 31 runs off 18 balls.

Samson's decision to bring Chahal back into the attack in the 18th over backfired as Singh took his chances against the spinner and struck consecutive fours to make it 18 off last 12 balls. Singh continued his onslaught against Prasidh, who conceded 17 runs in the penultimate over, which included two boundaries from the left-hander's blade, as KKR wrapped up the match in style.

Earlier, KKR restricted RR to a modest 152 for five, despite rival skipper Samson's half-century. For RR, Samson's 54 off 49 balls was the only saving grace, as wickets tumbled at regular intervals.

KKR bowlers justified skipper Iyer's decision to ask the opposition to bat first with quick wickets. A late onslaught by Shimron Hetymar (27 not out off 13 balls) took Rajasthan beyond the 150-run mark.

RR lost opener Devdutt Padikkal (2) cheaply as pacer Umesh Yadav (1/24) grabbed a return catch in the third over.
Samson, who hit seven boundaries and a six, joined in-form Jos Buttler (22 off 25 balls; 3x4s) and the duo tried to rally the innings, sharing 48 runs for the second wicket as KKR bowlers didn't allow RR batters to free their arms.

Samson carved through the point to get his first four in the fourth over as RR crawled to 12 for one. Samson and Buttler tried to break the shackles in the fifth over, which fetched RR 15 runs. The duo hammered Umesh for three boundaries, with the skipper hitting two of them.

Samson lofted Anukul Roy (1/28) over deep extra cover for his first maximum as RR amassed 11 runs in the sixth over, scoring 38 runs in power-play. The RR skipper then cut Sunil Narine (0/19) for another boundary.

But RR slipped to 55 for two after pacer Tim Southee (2/46) removed a rusty looking Buttler, who was caught by Shivam Mavi at long on. Samson struck two successive boundaries off Mavi (1/33) but was devoid of partners. He was able to add only 35 runs with Karun Nair (13) and 25 with Riyan Parag (19).

Karun (13), Parag (19) and Samson fell in quick succession as RR slipped to 115 for five from 90 for three.
While Nair became left-arm spinner Roy's only victim, Parag was caught by Roy at the deep-mid wicket off Southee.
Samson, in a bid to score quickly, gave a skier to Singh at deep-midwicket.