IPL 2022: Powell reveals Warner's response when asked if he wanted a single to get to his 100 in 20th over 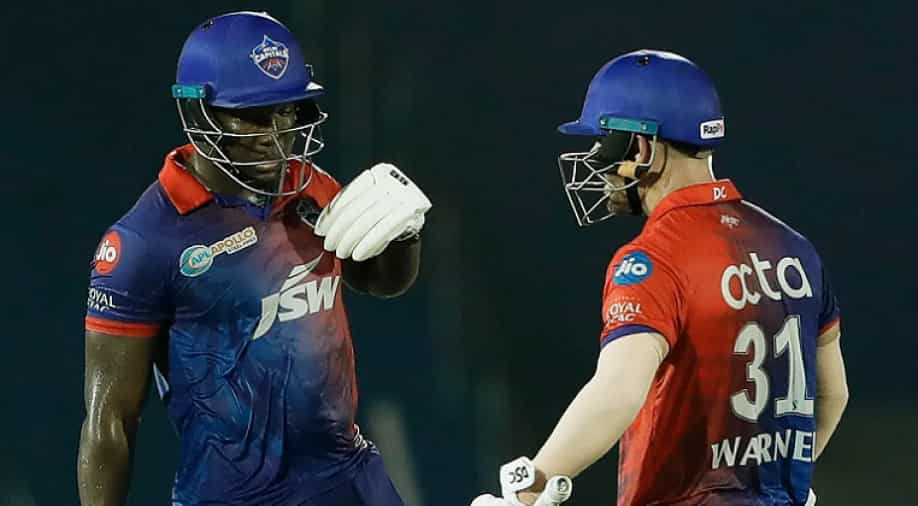 Powell revealed why Waner didn't complete his century against SRH in IPL 2022. | Photo - IPL Photograph:( Others )

Delhi Capitals star Rovman Powell revealed what David Warner told him when the left-hander was asked if he wanted a single to complete his ton against SRH in the 20th over in the IPL 2022 on Thursday.

David Warner and Rovman Powell played sensational knocks to help Delhi Capitals (DC) thrash Sunrisers Hyderabad (SRH) by 21 runs in the ongoing Indian Premier League (IPL) 2022 on Thursday (May 05). Warner slammed an unbeaten 92 off just 58 balls while Powell played a quickfire knock of 35-ball 67 to help DC post a strong total of 207 runs on the board and register a comfortable win.

Asked to bat first at the Brabourne Stadium in Mumbai, DC got off to a poor start as they lost opener Mandeep Singh on a duck before Mitchell Marsh was also sent packing cheaply on just 10 off 7 balls. However, Warner continued his terrific run with the willow on one end and combined with skipper Rishabh Pant (26) to add 48 runs for the third wicket.

After Pant's departure, Powell joined Warner in the middle and the duo took the SRH bowlers to the cleaners. In a clinical display of power-hitting, the duo went all guns blazing to help DC cross the 200-run mark. Warner was just 8 runs away from completing his century before the start of the 20th over during DC's innings.

However, Powell was on the strike at the start of the over. The West Indies all-rounder revealed he had asked Warner if he wanted him to take a single and give the Aussie star the strike to complete his hundred. Warner denied taking a single and urged Powell to go all out in the final over.

“At the start of the over, I asked, ‘do you want a single to try and get a hundred?’ He said, ‘Listen, that is not how the cricket is played. You should try to smack as far as you can,’ and I did that,” Powell told Star Sports after the game.

Warner could have easily taken the strike and tried to complete his century off the next five balls. However, he let Powell keep the strike. The West Indies all-rounder didn't disappoint and took 19 runs off the 20th over which was bowled by Umran Malik.

Khaleel Ahmed was the pick of the bowlers for Delhi Capitals as he picked up a three-wicket haul while Shardul Thakur bagged two wickets to help their team defend the total of 207 runs and bag their fifth win of the season. Delhi Capitals are currently placed fifth on the points table with five wins and as many losses in ten games.