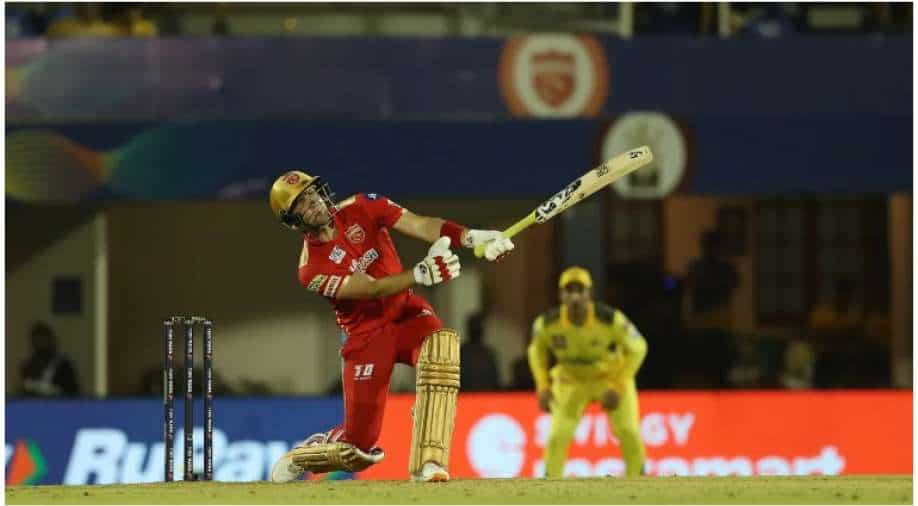 IPL 2022: Liam Livingstone, who returned with the Player-of-the-Match award, went bonkers with the bat and hit a huge six in the PBKS-CSK encounter.

Liam Livingstone was the star performer for Mayank Agarwal-led Punjab Kings (PBKS) as they locked horns with the defending champions Chennai Super Kings (CSK) in match 11 of the IPL 2022 edition in India, on Sunday evening (April 3).

Being asked to bat first, at the Brabourne Stadium, Mumbai, PBKS weren't off to a desirable start as they were reduced to 14-2 before Livingstone's 32-ball 60, studded with five fours and an equal number of sixes, led to Punjab's recovery. Along with vital knocks from Shikhar Dhawan, Jitesh Sharma and some late hits, PBKS posted 180-8 in 20 overs before defending the total by 54 runs.

While Livingstone also made a mark with the ball, returning with 2 for 25, the Englishman's contribution with the bat was the real difference. He hit plenty of maximums but his 108-metre six off Mukesh Choudhary made heads turn (the biggest six of the 15th season so far). Here's the video of his huge strike into the stands:

While CSK were never in the run-chase, being reduced to 36 for 5, Livingstone also succeeded in sending Chennai's in-form batter Shivam Dube back to the pavillion. The left-hander was looking dangerous in his 30-ball 57 before the Englishman sent him back and also accounted for Dwayne Bravo's wicket, taking a blinder of his own bowling.

At the post-match presentation, Livingstone said, "The first two games hadn't gone my way. Good to contribute to a win. Thought the boys did brilliantly. We got to a target which we thought was defendable and our seam bowlers were outstanding in the powerplay. Got to try as smart as we can. All our conversations have been 'try and be as exciting as we can'. Nice to get a few today. I've been swinging hard enough, nice to get a couple off the middle today. You don't need to remind me about it (his IPL record previously). Struggled with RR as well last year. Nice to have a performance like this. Bowling is something I really enjoy. Something I've spent a lot of time on. Been nice to contribute. Hopefully, as the tournament goes on, my spin comes into play. I also bat in the nets with Odean Smith, he's got me covered by a long way, trust me. I'm sure he'll get going at some point and you'll see why."