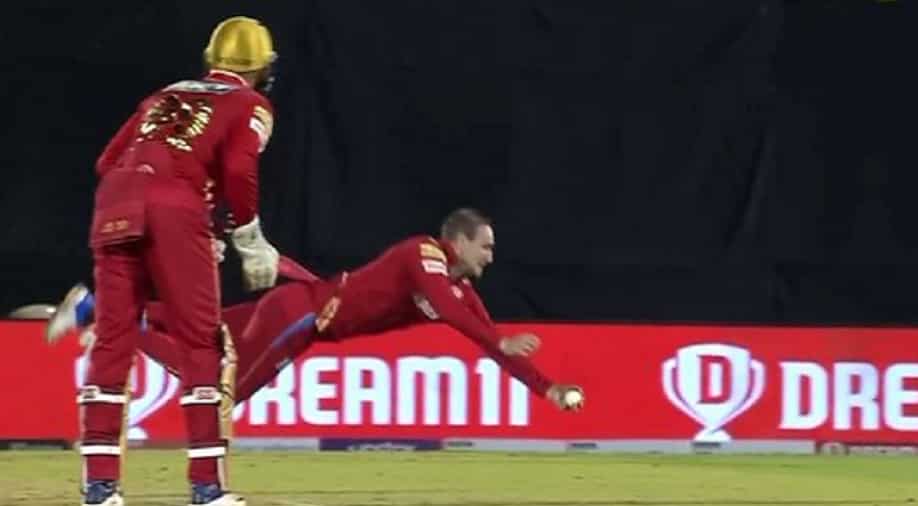 Liam Livingstone stole the show with the bat as Punjab Kings (PBKS) thrashed Chennai Super Kings (CSK) by 61 runs in the Indian Premier League (IPL) 2022 on Sunday (April 03). Livingstone, who was the most expensive overseas player at the IPL 2022 mega auction last month, finally proved his mettle in the IPL with a cracking half-century against CSK.

Livingstone came out to bat at no.4 for Punjab Kings when they were struggling at 14/2 inside the first two overs after losing two wickets in quick succession. The England batter went to play a dazzling knock of 60 runs off 32 balls to help his side post a strong total of 180 runs on the board.

Livingstone was not done there as he also contributed with the ball during CSK's run chase and plucked a stunning return catch to dismiss Dwayne Bravo. In the 15th over of CSK's innings, Livingstone ran and dived towards his left to pluck a one-handed stunner to send Bravo packing on a duck.

It was a sensational effort from the England all-rounder which left his teammates in awe. The video of the superb catch soon went viral on social media.

Also Read: MS Dhoni sprints to run out Bhanuka Rajapaksa with a stunning effort in CSK vs PBKS clash - WATCH

Livingstone bowled a total of three overs for Punjab Kings and ended up taking the important wickets of Shivam Dube and Bravo to help his side restrict CSK to a paltry 126 in the 181-run chase. After Indian pacer Vaibhav Arora triggered a top-order collapse, CSK batting line-up failed to recover as the Men in Yellow kept losing wickets at a regular interval.

While Punjab Kings have now won two of their first three matches of the season, CSK are yet to win their first game of the tournament this year and are currently sitting at the bottom of the points table with 0 points from three matches. CSK has lost their opening game against Kolkata Knight Riders before slipping to back-to-back defeats against Lucknow Super Giants and Punjab Kings in their next two matches.