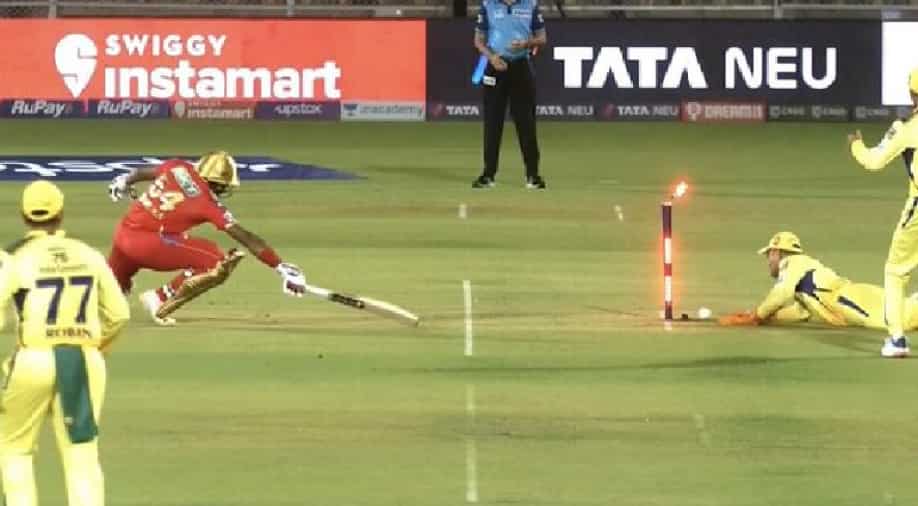 MS Dhoni pulled off a tunning run-out to send Bhanuka Rajapaksa packing during CSK's clash against Punjab Kings in the IPL 2022 on Sunday.

MS Dhoni produced another magical moment from behind the wickets during Chennai Super Kings (CSK)'s clash against Punjab Kings (PBKS) in the ongoing Indin Premier League (IPL) 2022 on Sunday (April 03). The veteran wicket-keeper came up with a stunning effort to run out Bhanuka Rajapaksa leaving the fans in awe of his speed and agility.

The dismissal took place in the second over of Punjab Kings' innings after CSK skipper Ravindra Jadeja won the toss and invited them to bat first. PBKS lost opener Mayank Agarwal cheaply on 4 runs in the very first over as the skipper failed to notch up a big score.

Rajapaksa came out to bat at number three and smacked a huge six to move to 9 off 5 balls before getting run out. On the second ball of the second over from Chris Jordan, Rajapaksa pushed the ball towards off side and tried to steal a single.

However, Jordan was quick to collect the ball and throw it towards Dhoni, who made a quick sprint and pulled off a brilliant diving effort to take the stumps down. It was a sensational effort from the 40-year-old as he rolled back the clock for his fans.

It was a Jonty Rhodes-like effort from Dhoni, who showed great presence of mind and had started sprinting towards the wicket as soon as he saw Jordan collect the ball on the other end. The former CSK skipper showcased great athleticism and beat Rajapaksa with his speed to take down the wickets before the PBKS batter could make it back.

After losing both Mayank and Rajapaksa cheaply, Punjab Kings found themselves in trouble early in their innings but opener Shikhar Dhawan (33) and Liam Livingstone (60) combined to put on a 95-run stand for the third wicket to set the stage for a big total for their side.