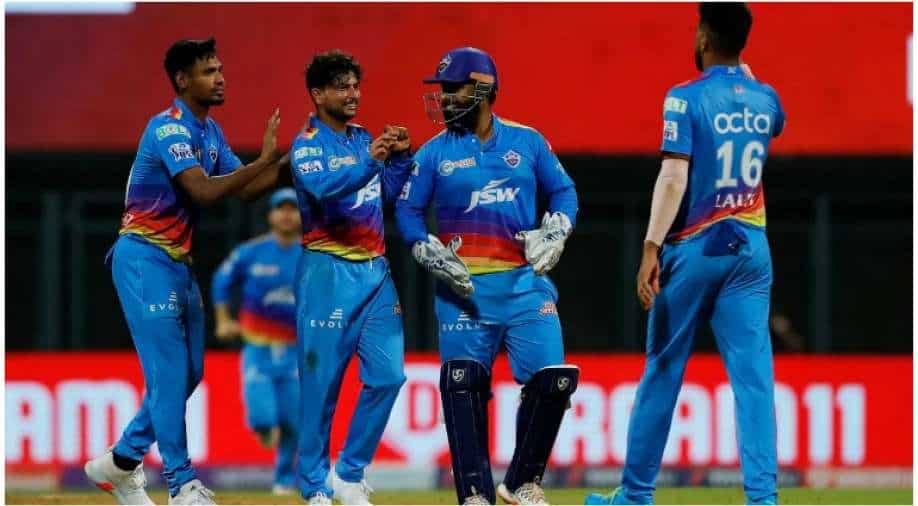 Kuldeep Yadav's stunning 4 for 14 and handy contributions from David Warner, Axar Patel and Rovman Powell led to DC's four-wicket win over KKR in match 41 of IPL 2022.

Match 41 of IPL 2022 saw the Rishabh Pant-led Delhi Capitals (DC) face the struggling Shreyas Iyer-led Kolkata Knight Riders (KKR) at the Wankhede Stadium, on Thursday evening (April 28). With both teams struggling in the bottom half of the points table, amid the playoffs race intensifying with each passing game, both sides fought hard in a modest-scoring affair before DC completed a double over KKR.

Opting to bowl first, Pant & Co. got off to a dream start. The pair of Mustafizur Rahman-Chetan Sakariya delivered the goods -- keeping things tight and sharing a wicket among each other in the early overs -- as KKR openers Aaron Finch and Venkatesh Iyer got out for cheap. Skipper Shreyas Iyer got going and pushed the scoreboard forward, he didn't get much help from the inexperienced middle-order with Baba Indrajit and Sunil Narine being dismissed early.

The pressure was felt by Iyer as he also threw his scalp for a 37-ball 42. DC's leading wicket-taker Kuldeep Yadav once again led the charge against his previous franchise by getting rid of the middle order and danger man Andre Russell -- for a 3-ball duck -- he surprisingly didn't complete his full quota of overs (3-0-14-3). Pant received some flak for opting to go ahead with Lalit Yadav instead as Nitish Rana's 56 and Rinku Singh's cameo propelled KKR to a modest 146-9.

In reply, DC opener Prithvi Shaw got dismissed for a first-ball duck as Umesh Yadav struck early. He dismissed Shaw with a low one-handed stunner of his own bowling. Later, he also removed David Warner, who returned with a 26-ball 42. Mitchell Marsh, who returned after recovering from Covid-19, contributed with a chancy 7-ball 13 whereas Lalit Yadav got a start before Sunil Narine sent him back.

Despite some setbacks, DC's lower order stood tall with all-rounders Axar Patel, Rovman Powell (33 not out) and Shardul Thakur (unbeaten 8) maintaining their composure and taking on the likes of Andre Russell and Venkatesh Iyer to take Delhi past the finish line. Shreyas' captaincy was a bit of a letdown as he preferred Venky Iyer in the 17th over, with the game still not completely out of hand, despite overs available from Russell-Tim Southee. Injury to debutant pacer Harshit Rana also didn't help his cause as they continue their winless streak (which is now stretched to five).

ALSO READ | From MS Dhoni to Parthiv Patel: Wicketkeepers with most dismissals in IPL

For DC, they remain alive in the playoffs race and move to the sixth spot, replacing Punjab Kings (PBKS) in the points table.