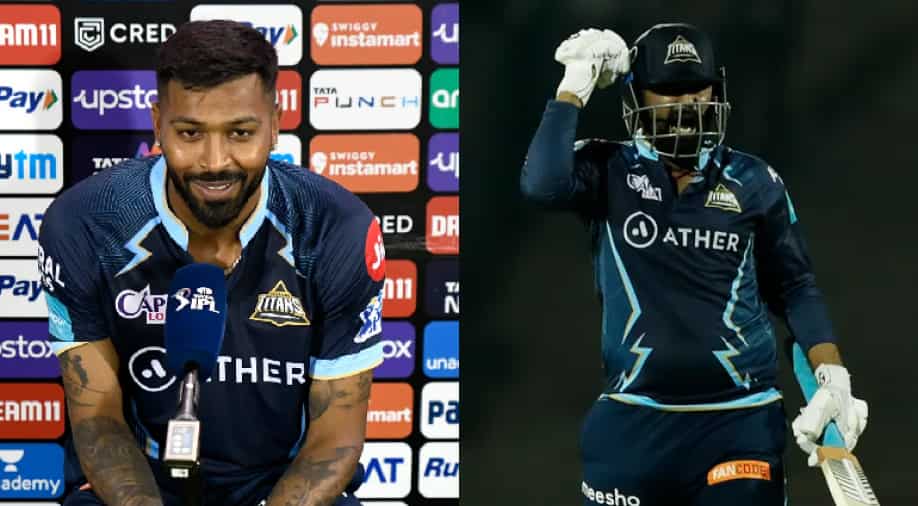 Rahul Tewatia slammed back-to-back sixes in the final two balls against Punjab Kings to help his side Gujarat Titans clinch a thriller in IPL 2022 on Friday. Here's how Gujarat Titans captain Hardik Pandya reacted to the win.

Gujarat Titans (GT) defeated Punjab Kings in a last-ball thriller in the ongoing Indian Premier League (IPL) 2022 on Friday (April 08). All-rounder Rahul Tewatita stole the show for GT as he slammed back-to-back sixes on the last two balls of the match with 12 runs to get to take his side over the line and pull off a stunning win.

Asked to chase down a target of 90 runs, opener Shubman Gill got his side off to a brilliant start as he slammed a brilliant knock of 96 runs off just 59 deliveries. After losing his opening partner Matthew Wade (6) cheaply, Gill combined with Sai Sudarshan (35) to add 101 runs for the second wicket.

He then added 37 runs for the third wicket with skipper Hardik Pandya (27) to take his team closer to the target before the duo departed in quick succession. Tewatia came out to bat in the final over after Hardik was run out on the very first ball of the 20th over. With 13 runs required off the last three balls, David Miller took a single and gave the strike to Tewtia, who smacked two straight sixes to seal the deal for his side.

The left-hand batter played a sensational cameo of 3-ball 13 to get his team over the line and secure two important points. Reacting to the stunning win, Gujarat Titans skipper Hardik Pandya said it was Punjab Kings' game to lose and also expressed sympathy for Mayank Agarwal & Co., who almost had won the game but lost after the final two deliveries.

"With the kind of ups and downs that happen, I have become neutral. Hats off to Tewatia. It is difficult to go out there and hit, and to do it under this pressure is great. It was Kings' game, I have sympathy for them," Hardik said post his side's win.

"Gill is telling everybody that he is there. A lot of credit goes to Sai as well for that partnership. It kept us in the game. I am going to get better with every game. I am getting tired as I'm not used to bowling four overs. But I'm getting better," he added.

Hardik has been phenomenal as a captain so far in the tournament as he has led his side Gujarat Titans to three straight wins in their first three games of the season. Gujarat Titans are currently placed at the second spot on the points table with six points from three matches.

Gujarat Titans will be hoping to continue their winning run this season when they take on Sunrisers Hyderabad (SRH) in their next game on Monday (April 11).