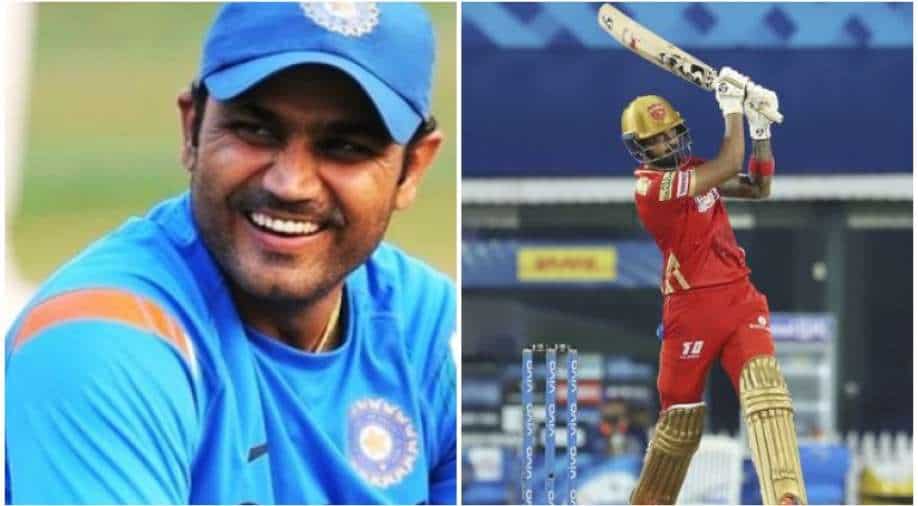 KL Rahul-led Punjab Kings (PBKS) continue to remain inconsistent in the second and final leg of IPL 2021. On Tuesday (September 28), the one-time runners-up lost their face-off versus defending champions and five-time winners Mumbai Indians (MI) by six wickets and remain in the bottom-half, i.e. the sixth position, post match 42.

Being asked to bat first, in Dubai, Punjab batters didn't make the most of their starts as Rahul departed for 22-ball 21 whereas the likes of Mandeep Singh (15) and Chris Gayle (1) couldn't do much. Aiden Markram's 42 and Deepak Hooda's 28 propelled PBKS to 135-6 before MI's Saurabh Tiwary (45) and Hardik Pandya's unbeaten 40 took them to a comfortable win, with an over to spare.

As Punjab continue to struggle in the bottom-half, former Indian opener-turned-commentator Virender Sehwag has schooled Rahul regarding his approach with the bat. The right-hander has 422 runs in 10 innings, at an average of 52.75 and strike-rate of over 130. Sehwag, however, feels he should play more naturally and attack from the word go.

Talking on Cricbuzz live, he said "It's the prior mindset that dictates how you approach your innings. Someone like Rohit Sharma plays in the same way because he reacts according to the delivery. But someone like KL Rahul comes to bat with a prior plan: to play cautiously or attack from the very first delivery."

ALSO READ | IPL 2021: Why does he have to be that guy again, asks Shane Warne on R Ashwin-Eoin Morgan altercation

Punjab will now lock horns with Eoin Morgan-led Kolkata Knight Riders (KKR) on Friday (October 1) in a bid to keep their playoffs hopes alive in the ongoing edition in the UAE. It will be interesting to see how Rahul goes about his business in the middle and whether or not he plays his natural game, as suggested by Sehwag.

T20 World Cup, PAK vs NZ live streaming: When and where to watch Pakistan vs New Zealand match?