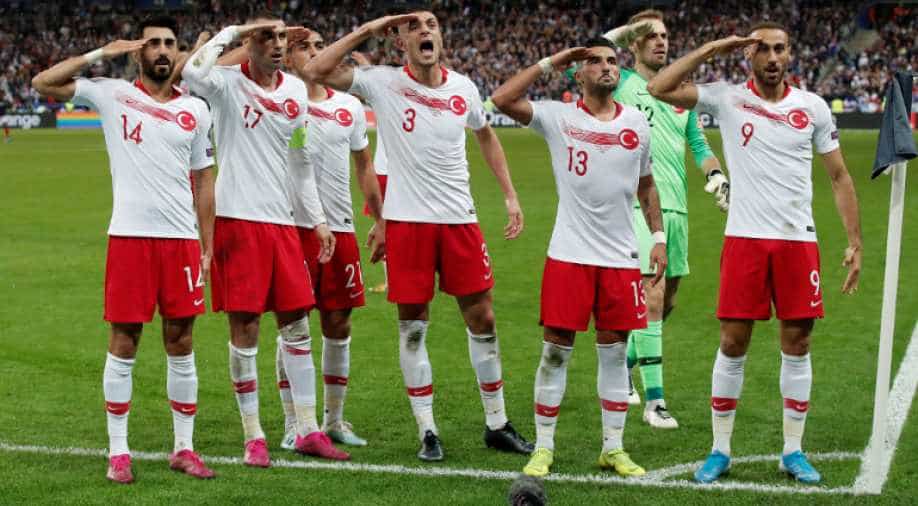 Turkish players had earlier reportedly made the military salute in a Euro qualifier against Albania on Friday.

European football body UEFA is investigating the Turkish national side after its players celebrated a goal against France in the Euro 2020 qualifier allegedly with a military-style salute.

Turkish players had earlier reportedly made the military salute in a Euro qualifier against Albania on Friday.

UEFA said in a statement that it has appointed an 'Ethics and Disciplinary Inspector' to investigate. The football body added that it was investigating "potential provocative political behaviour" by the Turkish players during the match in Paris on Monday and another Euro 2020 qualifier against Albania on October 11.

The controversial salute occurred after Turkey's Kaan Ayhan equalised for Turkey in the 81st minute against France during the Euro qualifter. Turkish players lined-up in front of their supporters and saluted raising alarm in football circles leading UEFA to officially investigate the incident.

The Turkish Football Federation had posted a tweet after the Albania game last week, which showed the players and coaching staff in the dressing room making the military salute.

In the tweet, the federation wrote that the team "dedicated their victory to our brave soldiers and fellow martyrs."

Turkey's sports minister Mehmet Muharrem Kasapoglu supported the players who saluted the country's soldiers during their game at the Stade de France.

"Those who remained quiet about Griezmann's military salute are trying to distort our national footballers' nice salute," Kasapoglu said at a press confrence.

"Those who are trying to block out their failure on the pitch should give up on their efforts. The result is clear," Kasapoglu added while cautioning UEFA to be "prudent" in their investigation.