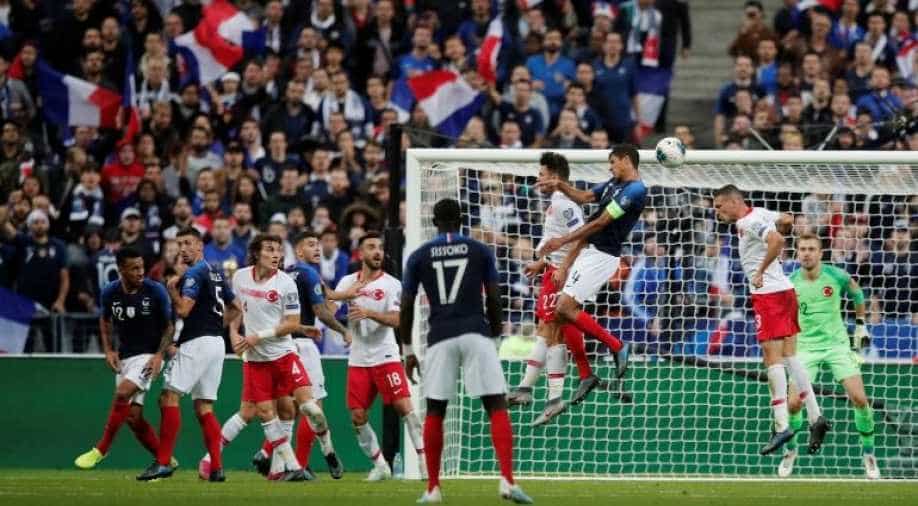 Turkey's Ayhan equalised eight minutes from time after France substitute Olivier Giroud opened the scoring in the 76th as the visitors stayed top of Group H with 19 points.

France must wait to claim a place at Euro 2020 after the world champions were held to a 1-1 draw at home to Turkey in a high-octane qualifying game on Monday.

Turkey's Kaan Ayhan equalised eight minutes from time after France substitute Olivier Giroud opened the scoring in the 76th as the visitors stayed top of Group H with 19 points from eight games, ahead of Les Bleus due to a 2-0 win in Konya last June.

Iceland is third on 15 points after goals by Arnor Sigurdsson and Kolbeinn Sigthorsson earned a 2-0 home victory over Andorra, with Albania fourth on 12 points following a 4-0 away win against Moldova.

French police were on high alert after President Emmanuel Macron said Turkey's military operation against Kurdish forces in Syria could lead to an “unsustainable humanitarian situation” and threatened to “help the Islamic State group re-emerge in the region".

With up to 40,000 Turkey fans expected at the stadium, some 1,000 police officers were on duty in and around the Stade de France to prevent potential crowd trouble, but the atmosphere remained peaceful throughout the evening.

"We could have avoided that goal," France coach Didier Deschamps said. "We did everything we needed to win that game, we had the chances, they didn't, but it is what it is.

"It's a good point. We'll have to finish the job in November," he added, saying Turkey, who have picked up four points against France, deserved to top the group.

"We are the two best teams in the group. Qualifiers are always complicated, it's a long road. We should have been more efficient. They defended a lot and they deserve to be where they are."

France take on Moldova and Turkey host Iceland in the next round of matches in November.

The world champions were still without injured goalkeeper Hugo Lloris, striker Kylian Mbappe and midfielder Paul Pogba, and Wissam Ben Yedder started up front in place of Giroud, who paid for his lack of playing time with Chelsea.

France were the most dangerous side as Turkey struggled to cope with the pace of Kingsley Coman but the visiting defence, which had conceded only two goals in qualifying so far, held firm.

Turkey, however, created a chance to opening the scoring on the hour only for Burak Yilmaz to sky his attempt over the bar at the end of a quick counter-attack.

With Ben Yedder struggling to find space, Deschamps replaced him with Giroud in the 72nd minute and it the substitute took four minutes to make an impact, heading home Griezmann's corner kick.

The hosts' joy, however, was short-lived as Turkey levelled six minutes later when Ayhan nodded in a free kick.